Share All sharing options for: German gay pro soccer player tells of strain of staying in the closet 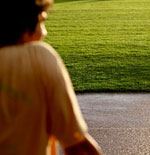 Fluter's caption: "A gay football player? Not in this photo."

A gay soccer player in Germany's Bundesliga gave a wide-ranging interview to Fluter magazine in which he said: "The price for living my dream in the Bundesliga is very high. I have to put on an act and deny my true self." The player, though, seems to suggest that his teammates know about him but they don't care.

The headline of the piece is "The Man Who Doesn't Actually Exist" and begins with this from the writer: "We’ve spoken for a long time but it was unclear until recently if we would ever meet. I enter the room and find a visibly overwhelmed young man who would obviously love to run away in the next moment. He stays. No one is allowed to know about this meeting, because it never happened."

The whole Q&A is fascinating and you should read the whole thing (helpfully translated by Jenny Jenkins). Here is an excerpt:

Why is there fear of this publicity?

The stories, the headlines and the magazines. Everyone would love to know about the wicked things my partner and I get up to beneath the sheets. Does the super-man footballer lie on top or on the bottom? I can think of a few! My passion – football - would be irrelevant. Either I could stroll to an event with my boyfriend and then I’d be in the media for three weeks, or I insist on my privacy and couldn’t be true to myself. There is simply no solution. It’s unimaginable that I could, like a heterosexual player, show up with a new partner and then be forgotten the next day. Normality doesn’t exist. At least, it wouldn’t be normal for me to allow the entire country to discuss my intimate life. That only concerns me and the person who is at my side.

And is there “a person at your side” – someone about whom one could ask one of these hated questions?

Today and now I find this question actually very important. I have no one and neither do the other well known players that I know of. Although: I was once in a relationship. But you can imagine that a month long game of hide-and-seek is poisonous to any partnership. I had to make a decision. Sure, it was nice to be successful in football after that. It was priced accordingly.

Instead of a boyfriend is there a [beard] for important occasions?

That cliché is unfortunately true. There are events I can’t go to alone and needs must. That the way everyone does it. Only I never had to pay because after all, a genuine gay guy like me has his best girlfriends.

The player talks about the strain of passing as straight and that he knows other gay players but that they never meet out of fear.

He does, though, say that he has had no problems on his team and that teammates ask him "quite technical things," which I assume from the framing has to do with his sex life. He also said "I don’t know a single player in the whole of the league that has a problem with it."

Fluter was described the New York Times as an "otherwise little-read Web magazine sponsored by a government-financed NGO aimed at increasing civic participation." But the interview has created immense interest, with major media discussing it.

German Chancellor Angela Merkel even addressed it, saying gay players should not be fearful. Said Merkel at a press conference:

“I’m of the opinion that anyone who has the strength and bravery to do it — we in politics have been down this road — should know that he lives in a country were he should not have to be afraid,” she said. “That there is still fear out there, because of the particular context, is something we have to take into account, but we can give a signal: ‘You don’t need to be afraid.’ ”

My sense from the interview is that this player would love to come out, but that he stays closeted out of fear and what the attendant publicity would bring from the fans and media. He does not want to be the only one, and said his dream is to "just to go openly with a potential partner to a restaurant." Ultimately, nothing is stopping him but himself.