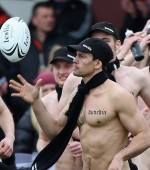 The All Blacks rugby team is a national passion in New Zealand and they even have imitators in the Nude Blacks, a Dunedin, N.Z.-based team. The Nude Blacks are comprised mostly of students and they stage regular games.

The Nude Blacks started as a lark in 2002 but became popular enough to stage matches in Dunedin prior to regular international rugby events. Their only loss in their history came last year when they were beaten by a group of Spanish female players. The catch here was that the women had to remove clothing every time they scored, so the Nude Blacks played little defense.

The lads even use the visibility to raise money for charity, this year helping a 6-year-old girl with leukemia. Their popularity is a sign of how relaxed other parts of the world are about nudity vs. the U.S. Getty Images sent a stream of uncensored images out and a local paper ran a video that hid nothing.

These images -- which I edited so they are safe for work -- came from this weekend's friendly with the Springbox from South Africa.