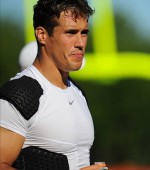 This week’s offerings include the return of football, including not one but two shots of Brady Quinn, who seems to have disappeared in the NFL.

We also have images from that wonderful Aussie Rules Football tradition of "recovery sessions," where players frolic in the surf. Plus, shots from soccer, baseball and college football, including a male cheerleader.

Photo 1: Kieren Jack of the Swans dries off after a swim during a Sydney Swans Recovery Session at Maroubra Beach in Sydney, Australia. (Photo by Ryan Pierse/Getty Images)

Photo 2: Dayne Beams of the Magpies looks on during a Collingwood Magpies AFL recovery session at the St Kilda Sea Baths in Melbourne, Australia. (Photo by Scott Barbour/Getty Images)

Photo 3: Scott Pendlebury of the Magpies walks out of the water during a Collingwod Magpies AFL recovery session. (Photo by Quinn Rooney/Getty Images)

Photo 5: Kansas City Chiefs quarterback Brady Quinn (9) on the sideline during the third quarter against the Buffalo Bills. (Photo by: Kevin Hoffman-US PRESSWIRE)

Photo 7: St. Louis Rams running back Daryl Richardson (26) is picked up by Rams guard Harvey Dahl (62) after scoring on a 2 point conversion rush attempt against the Washington Redskins. (Photo by: Photo by Scott Rovak-US PRESSWIRE)

Photo 9: Brigham Young Cougars wide receiver Mitch Mathews (10) warms up prior to a game against the Utah Utes at Rice-Eccles Stadium. (Photo by: Russ Isabella-US PRESSWIRE)

Photo 11: Florida Gators cheerleader celebrates his team scoring against the Tennessee Volunteers during the second half at Neyland Stadium. (Photo by: Jim Brown-US PRESSWIRE)