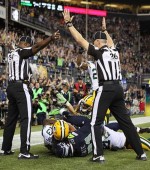 The NFL has officially become a farce after replacement officials stole a game from the Green Bay Packers on the last play of Monday night's game against the Seattle Seahawks. The Seahawks "won" 14-12 on a last-play TD pass from Russell Wilson to Golden Tate. Except, the pass was actually intercepted by M.D. Jennings, which replay clearly showed over and over.

ESPN's Mike Tirico and Jon Gruden did not pull their punches in ripping the call, and former NFL official Gerry Austin was clear in explaining that Jennings had possession of the pass. Even more bizarre was that one ref ruled TD and the other interception. The refs also missed Tate pushing off on offensive pass interference.

"13th man beat us tonight," Packers tight end Tom Crabtree tweeted. Yahoo's Mike Silver tweeted right after: "Aaron rodgers, on the field, to the official: 'just f------ awful'... He was sure the packers had been jobbed." The Raven's Brendon Ayanbadejo tweeted: "REFtile dysfunction." The end of the game was a hot trend on Twitter and will be the most talked-about sports story this week. Hopefully, it will cause the NFL to quit trying to screw the locked-out officials and settle their contract dispute.

The game also caused millions of dollars to change hands since the Packers were 3-point favorites and would have covered had the refs made the right call. These replacements are incompetent and have made games almost unwatchable this season. Serves the NFL right for having the entire nation see it unfold live.

Here is a great shot by Otto Greule Jr of Getty Images showing the incompetence of the refs at the end as one signals TD, the other an interception: 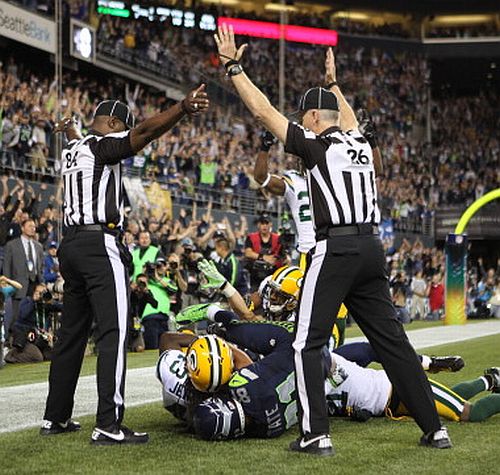