Share All sharing options for: Chris Kluwe gets hate mail cartoon for his pro-gay marriage stance 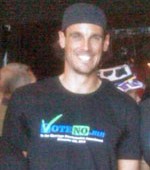 Minnesota Vikings punter Chris Kluwe is a hero to gays and lesbians and right-thinking Americans for his his unflinching and passionate support for same-sex marriage. He is working hard to defeat an amendment in Minnesota that would enshrine marriage inequality in the state constitution. He's also making some enemies.

On his Twitter feed, Kluwe posted a cartoon some sicko sent him that compared him to a pedophile. The cartoon has apparently been around for a while and sent to others who support the rights of gays to marry. Kluwe told Outsports:

It arrived in the mail along with photocopied articles demeaning gays as "serial killers" and "pedophiles." Doing some research, it appears the original cartoon came out in 1999 and this group (American News Center) has been mailing it out for multiple years now. No actual writing, no name, just lazy copy-pasted hate.

"No points for artistry," Kluwe tweeted once he realized the person Photoshopped his name under an existing cartoon.

The founder of the Hamburg Post blog in Hamburg, Minn., also received the same cartoon from someone claiming to be from the American News Center in 2010. He also discovered other bloggers who support gay marriage who got the same cartoon. Based on an Internet search, whoever calls himself the American News Center appears to be in Minnesota and hates gay people and liberals.

Kluwe isn't taking this all that seriously, tweeting: "Remember last week when I said I got the greatest piece of hate mail ever? I lied. THIS is the greatest ever." He then linked to the cartoon. As for the hate mail last week, he called it four pages of "insane rambling," concluding: "I just received the most awesomely hilarious piece of hate mail ever. Bless your tender heart, Ms. Jannette Edwards. You brightened my day."

Here is the cartoon sent to Kluwe: 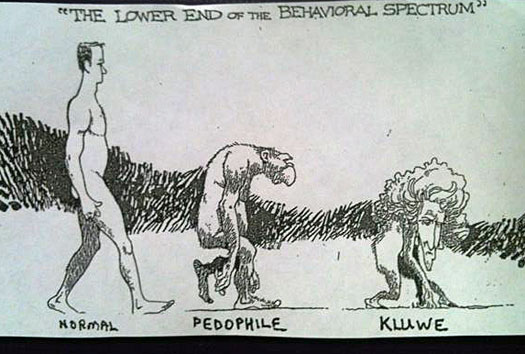