Another Gay Bowl is in the books. Held in Denver last weekend, Oct. 21-23, Gay Bowl XII saw a fifth city join the circle of champions, the first-even women's division, and a five-overtime game! As always, big thanks to everyone who spent the last two years organizing this tournament. It takes an overwhelming amount of work for even a committee of dozens to host one of these tournaments. It was one of the best ever, and the facility -- Dicks Sporting Goods Park -- was top-notch. Thank you, Denver!

The San Diego Bolts won their first national championship, beating the New York Warriors, 33-32, in overtime of the finals at Gay Bowl XII. It was the first championship for San Diego, and many of the players were emotional after the win. Doug Komlenic, who's participated in almost every Gay Bowl, was overcome with emotion just moments after the Warriors failed to convert on their first overtime PAT.

The Bolts nearly became the perennial bridesmaids. Having lost in the finals two of the previous four years, they were headed that way again. They trailed at halftime, 20-8, after the Warriors marched down the field for a last-second touchdown to close out the first half. But an interception and a late touchdown catapulted the Bolts into overtime in which quarterback Eric Reissner threw a touchdown and a PAT.

The Warriors scored a touchdown when Alon Hacohen's pass was snatched out of the air by receiver Nna Okochi, who ran it in for a score. But a strong rush forced Hacohen to throw the extra-point pass off his back foot, and it was knocked down short of the goal line securing the win for the Bolts.

The Bolts became only the third team to win the championship after losing a game in pool play. They avenged their Friday afternoon loss to the Los Angeles Empire by beating them in the semifinals Sunday afternoon.

Now the pressure's on. Only one team -- the Chicago Flames in 2006 -- failed to repeat as champions. And even they made it to the finals.

In the B bracket, the Michigan Panthers came out on top, beating the Philadelphia Revolution in the final. It's cool to see these two teams in particular battle it out for the title. Michigan has had its ups and downs over the years, finishing in the top 10 in 2009 and finishing near the bottom of the pack recently. Philadelphia has struggled mightily since entering the tournament three years ago. To see these two teams in the B-bracket final is a testament to the payoff of hard work and determination. Congratulations!

Denver has arrived...and the greatest game I've ever been a part of

Speaking of hard work and determination, the Denver Summit have arrived. Every year, only a handful of teams entering the Gay Bowl have a legitimate chance to win the championship. Going into Gay Bowl XIII next year, Denver will have to be included on that very short list.

My team, the Los Angeles Empire, got slotted to play them in our first playoff game. We were the No. 2 seed -- they were the No. 15 seed. Going into the game they had won their games by 48, 36 and 40. They were no joke. So when my team was down, 18-6, at halftime, the hundreds of fans on the sidelines were ecstatic...and I wasn't surprised.

The key to their game is their quarterback. Jason Buniger, standing at about 6-foot-5, was brilliant, picking apart our zone in the first half facing only one third down. He is one of the top five quarterbacks in the tournament. Players on the team said he's their backup quarterback. If so, he's the best backup quarterback since Steve Young.

Late in the game, it looked like the home crowd was going to get what it wanted: The biggest upset in tournament history. Denver had just scored to retake a 12-point game with 7 minutes left. But a two-play drive brought Los Angeles back to within 5. And facing 3rd and 10 from their 25 on the next drive, with time ticking down, Denver completed a 50-yard pass play that gave them 1st and goal from the 3 with 2 minutes left. The game was over. 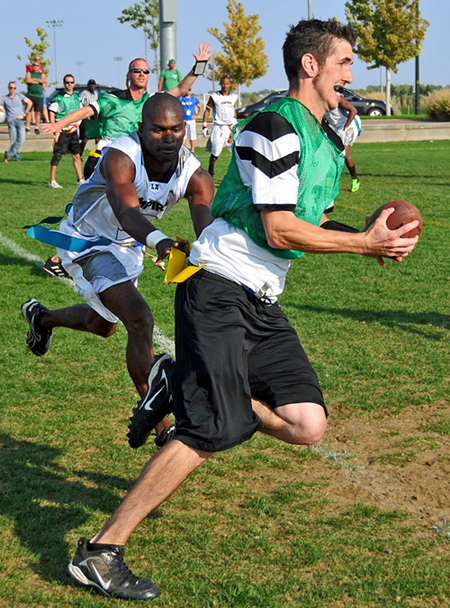 Except, it wasn't. First play: Tipped pass gets a 1-yard gain. Second play: Incomplete pass. Third play: Incomplete pass. When the quarterback's rush up the middle on fourth down was spotted at the 6-inch line, it gave my team just over a minute to march 80 yards for the win. The team quickly marched down to the 10-yard line. Then, with 20 seconds left, the Mile High Miracle occurred.

Quarterback Christophe Faubert rolled left headed for a touchdown...but was tackled 2 yards short. With no timeouts left, he and the offense hurried to the line of scrimmage. Faubert would spike the ball and stop the clock. Unbeknownst to him (due to confusion on the field), it was already 4th down. So when the ball was snapped and his pass spiked into the ground, the game was over and we had lost.

Except...a second before the snap, one of our receivers called a timeout. An illegal timeout. One we didn't have. The referee had thrown the flag before the snap. And in the Gay Bowl, there is no 10-second runoff. It was a 5-yard penalty, clock stopped. With one play left, Faubert found a wide-open receiver in the back left corner of the end zone, and we escaped with a 1-point victory.

By the way, the player who called the timeout spent much of dinner that night trying to convince us we had another timeout left. It was the most fortunate mistake (for us) I've ever seen someone make in a football game.

For Denver, it was a crappy way to exit the tournament. They are a top-5 team that will, according to the current rules, be seeded 15th in the Gay Bowl next year. For fairness and the integrity of the tournament, that simply has to change. They are now one of the few teams with a legitimate shot at the title. Their seed next year should reflect that.

The Cleveland Rockers and the San Francisco Crash just wouldn't give up in the 13th place game. They wouldn't quit after the first overtime, or the second overtime...In fact, the two teams played a five-overtime game, the longest in Gay Bowl history. Ultimately, the Rockers won, 58-52, in what is (unofficially) also the highest-scoring game in Gay Bowl history. Congratulations to both teams on a hard-fought game!

The Denver 303 won the first-ever women's division, beating the Brooklyn Mavericks in the final. It was awesome to see the women's division as part of the Gay Bowl. Seven teams mostly from Denver, New York and Chicago rallied in a spirited competition that left many of the men saying things like, "Damn, those women can ball!"

In talking to many of the women over the weekend, they loved the event. And in talking to the men, they loved having the women there as well! I can see there being eight or 10 teams next time around with the enthusiasm that came out of this event. The NGFFL has started something cool here.

I'm curious to see how the women's division shakes out over the next two years. The softball folks had joint events -- and a joint organization -- for years before splitting the men and the women. If one city can host both at the same time, it would be awesome to see both tournaments coincide on the same fields. That's just a lot of fields. How the organization shifts and changes will depend on women stepping up and committing themselves to growing this great new piece of gay football. After talking with a bunch of them, I know they will.