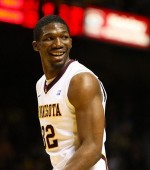 The fight against a proposed amendment in Minnesota to prohibit same-sex marriage has a new sports ally in Trevor Mbakwe, senior forward for the University of Minnesota basketball team.

Mbakwe, who led the the Big Ten in rebounding a year ago, wrote an open letter that was posted by Minnesotans for Equality:

My name is Trevor Mbakwe, I play forward for the Minnesota Gophers and I am asking you to stand with me and vote against the constitutional amendment this November, limiting marriage to ONLY be between a man and a woman.

This proposed amendment would permanently ADD in discrimination to our states constitution. This feels like taking a step back in time, it’s 2012, and this sort of extreme act is not only un-fair … it’s anti-Minnesotan!

By voting NO to this extreme Marriage Amendment, you're sending a message that you support the rights for all loving couples, gay or straight.

This change to our constitution will set in stone, the inability to marry for thousands of friends, family members, neighbors and sports fans right here in Minnesota.

I’m asking you to join me, and other Minnesota Athletes, at the Crooked Pint Thursday September 14th for an awareness-raiser. 100% of the proceeds will go directly towards defeating the amendment in November.

Get on board with the majority of Minnesotans and Gopher Fans by voting NO against this Marriage Discrimination Amendment.

It’s the right thing to do!

Mbakwe joins Minnesota Vikings punter Chris Kluwe as high-profile athletes who have spoken out for same-sex marriage. Polls have been split on the amendment's chances of passage, with no polling done in the past six weeks.