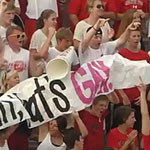 Supporters of Spanish Fort High School in Alabama thought they were being clever when they unfurled a sign during a nationally televised game on ESPN on Monday that read "Purple? Man, that's GAY." Spanish Fort's opponent was Daphne High, whose team colors are purple.

These same fans also put up a sign that read "Daphne, Isn't That a Girl's Name." They somehow missed the opportunity to make a condom joke, since Daphne's nickname is the Trojans. Spanish Fort won the game, 20-14.

The gay sign is offensive, but so uncreative and lame that those holding it deserved to be mocked rather than lectured (as Elvis Costello would say: "I used to be disgusted And now I try to be amused.") Rick Chandler of NBC Sports did a nice takedown:

The scores are in. Originality: 0.0 (out of 10). Presentation: 0.0. Penmanship: 8.5. Guy in crowd wearing sunglasses during a night game: 0.0. Your town being taken over by four different countries since 1712, including France and the Confederate States of America: 0.0. 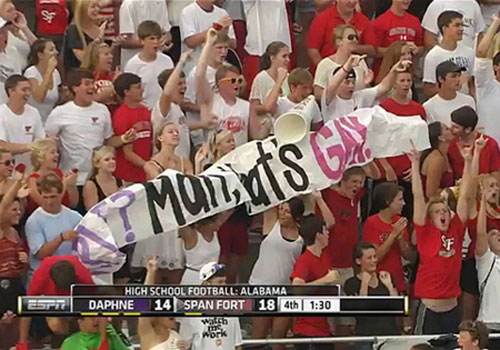