Share All sharing options for: Vote to help Blake Skjellerup make it back to the Winter Olympics 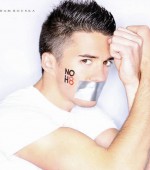 Blake Skjellerup is one of our favorite openly gay athletes. He competed in short track speedskating at the 2010 Winter Olympics and is hoping to make the New Zealand team for 2014 in Sochi, Russia. But he has no sponsors and needs money to train and compete.

You can help by voting for him to win a $10,000 scholarship from AMP, an insurance, financial services and securities company in New Zealand. Click on this link and then on the "vote for me" box on the right. The voting ends at the end of the month and Skjellerup has a slight lead. He provided Outsports with an update:

I am currently living and training in Melbourne and it is going well. I am preparing for the New Zealand National Championships in Auckland next weekend, where I will hopefully skate my way to my third consecutive title.

I am also preparing for the world cup circuit, which kicks off in October in Calgary, followed by Montreal. I have competitions in Nagoya and Shanghai in November and December, and Sochi and Dresden in January and February.

I am still without a sponsor so opportunities like the AMP scholarship are highly valuable to someone like myself.

We need more openly gay and lesbian elite athletes and Skjellerup has provided a great role model. You can follow him on Facebook and Twitter, and have no excuse not to vote for him.