Share All sharing options for: Brendon Ayanbadejo to use Super Bowl platform to push for gay rights 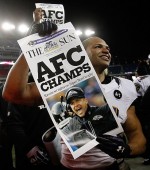 Brendon Ayanbadejo is a linebacker for the AFC Champion Baltimore Ravens and will play in the Super Bowl Feb. 3 against the San Francisco 49ers. He is passionate about gay rights and wants to use the media frenzy a Super Bowl brings to call attention to the issue. From Frank Bruni in the New York Times:

He tapped out an email to Brian Ellner, a leading marriage-equality advocate with whom he had worked before, and Michael Skolnik, the political director for Russell Simmons, a hip-hop mogul who has become involved in many issues, including same-sex marriage.

Ayanbadejo wrote: “Is there anything I can do for marriage equality or anti-bullying over the next couple of weeks to harness this Super Bowl media?” The time stamp on the email was 3:40:35 A.M.

On the phone Tuesday afternoon, Ayanbadejo called that missive his “Jerry Maguire email,” referring to the Tom Cruise movie, in which the plot is set in motion when Maguire, played by Cruise, seizes the occasion of a sleepless night to pour his heart and soul into a mission statement.

Wow. Talk about an athlete who doesn't just pay lip service to a cause. Ayanbadejo is becoming the premier straight ally in sports for gay rights. I follow his Twitter feed and was impressed that he posted this in the hours after beating the Patriots to reach the Super Bowl:

Maryland voters approved same-sex marriage in November and Ayanbadejo was a vocal advocate for its passage.

He was profiled on ESPN this weekend, but one other media appearance has so far eluded him -- a spot on the Ellen DeGeneres show. “That’s my ultimate goal after the Super Bowl,” Ayanbadejo told Bruni. “To go on Ellen’s show, to be dancing with her, to bust a move with her.” On that count, fellow NFL player and strong gay rights supporter Chris Kluwe has him beat -- Kluwe was on Ellen last week. Ayanbadejo was busy though, getting ready for the AFC Championship Game and this moment: 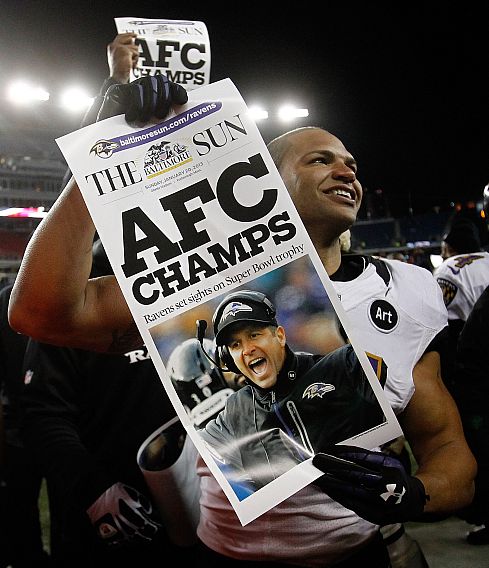 Brendon Ayanbadejo #51 of the Baltimore Ravens celebrates after defeating the New England Patriots during the 2013 AFC Championship game at Gillette Stadium on Jan. 20, 2013 in Foxboro, Massachusetts. (Photo by Jim Rogash/Getty Images)