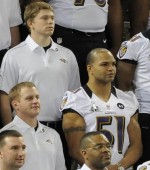 "Gay" and "Super Bowl" used to not go together, with the media reluctant to ask players anything of relevance on the issue. But times are changing and we saw it Tuesday at this year's Super Bowl media day. Players from both the Baltimore Ravens and San Francisco 49ers talked about gay marriage and gay players in the NFL.

USA TODAY asked several 49ers about Kwame Harris, a 49er from 2003-2007 who was charged with assaulting his former boyfriend. Basically, guys who played with Harris said had their known of his sexual orientation then, it would not have mattered to them.

"I don't think so, not at all," tight end Delanie Walker, who played with Harris for two seasons, said. "It probably wouldn't affect me, but other guys might feel different."

These thoughts were echoed by punter Andy Lee and long snapper Brian Jennings. "To each his own," Lee said. "It is what it is. You go about it and do your job and that's what you're there for.'

Gay marriage was a topic addressed by three Ravens, center Matt Birk, safety Bernard Pollard and linebacker Brendon Ayanbadejo. Birk, who is retiring after the game, said "I believe a marriage is between a man and a woman," citing his Catholic upbringing. Pollard is also against gay marriage, USA TODAY said, though I could find no quotes of him on the subject.

Ayanbadejo has gotten a lot of media attention for his unstinting support for gay rights and he had the spotlight on Tuesday:

"Doing what's right in this day and age, you shouldn't be applauded for that," Ayanbadejo said. "I was the first athlete to talk about (marriage equality) when a lot of athletes weren't talking about it."

At the same time, he sounded a bit weary to keep being asked about it:

“Actually, I talked about that so I don’t want to keep touching on that subject, but obviously we’re here at the Super Bowl and it’s the pinnacle of sports here in the United States so I just really want to focus. A lot of media stuff has come up with Ayanbadejo this and Ayanbadejo that but I think the most important thing is that I’m here with my team. My focus is on this football game and this is the most important game I’ve ever played in my life.”

There was a very nice profile of Ayanbadejo by Mike Silver of Yahoo and I learned that the player has a 22-month-old son who needs to undergo major surgery this spring to fix a congenital heart defect. It's obvious Ayanbadejo has a lot on his mind, but that has not stopped him from advocating for equality.

On another front, Queerty reports that the NFL's annual Super Bowl Gospel Celebration "is packed with folks who have made public statements attacking the LGBT community." Gospel singers against gay rights? That's not really news to me, but sad nonetheless and kudos to Queerty for reporting it.