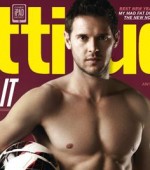 Matt Jarvis, a player on the West Ham soccer club in the English Premier League, is on the cover of the British gay magazine Attitude urging gay players to come out of the closet.

"It's everyday life. It's not something that's going to be a shock," said Jarvis, himself married. "I'm sure there are many footballers who are gay, but when they decide to actually come out and say it, it is a different story. It's one that I'm sure they've thought about many times. But it's a hard thing for them to do."

Jarvis, the third pro soccer player to be on the cover of Attitude (along with David Beckham and Freddie Ljungberg), says he thinks an openly gay player would get support and might also perform better with the pressure of hiding removed.

"If you can let that go and then just concentrate on your one goal, which is whichever sport you're doing to the best of your ability, I think that would help. Definitely."

It's great to see another athlete ally join the ranks and Jarvis comes across as thoughtful and articulate on the issue.