UFC Hall of Fame fighter Forrest Griffin and openly lesbian fighter Liz Carmouche are spokespeople for a new campaign to encourage people to get tested for HIV. The campaign is called "Protect Yourself at All Times" and is a joint effort between the UFC and the Gay and Lesbian Community Center of Southern Nevada.

"I had 15 fights in the UFC Octagon during my career, and before each and every one of them, I had a HIV test," Griffin said. "I’m encouraging everybody to show themselves and their partners the same respect I showed my opponents by getting tested and protecting themselves at all times."

The campaign has two goals: Get tested and know your status; and protect yourself with safe sex practices. "There’s a feeling of invincibility that comes with being young, with being fit and the prime of your life," said Carmouche. "But I learned when I was in the US Marines just like I’ve learned as a UFC fighter, no-one is invincible, and that you have to project yourself at all times."

"As someone who grew up in the 1980s and saw the virus beaten back with education in the 1990s, I was stunned to learn from our friends at The Center that HIV is still having such a dramatic impact on young people," said UFC Chief Operating Officer Ike Lawrence Epstein. "No other sport reaches the under 35 demographic like the UFC does and the UFC felt a duty to try and do something about this situation."

As part of the campaign, UFC fighters will visit testing centers and participate in public service announcements.The Centers for Disease Control estimates there are 50,000 new infections each year, about half of those under 35. The partnership is a terrific idea with the UFC having a reach with young men, many of whom are those most in danger of contracting HIV. 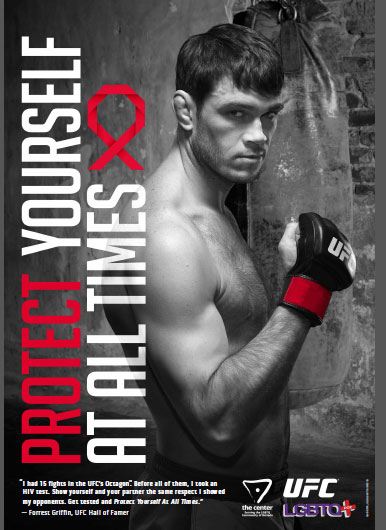 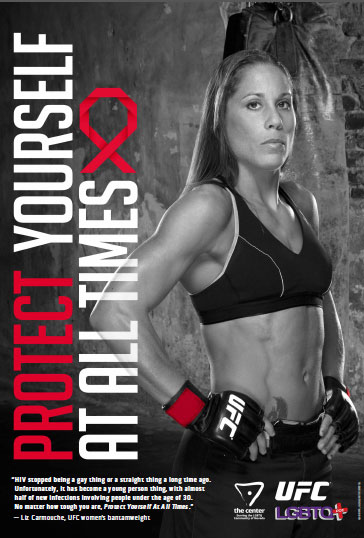