The Saunders High School boys basketball team played their first game of the season Sunday, and it was special.

The players entered the gym and warmed up wearing Nike #BeTrue shirts in solidarity with and support of their head coach, Anthony Nicodemo, who came out publicly as gay earlier this year. The #BeTrue line is Nike's LGBT brand that has helped fund the work of the LGBT Sports Coalition. It was a pretty powerful statement by the players, largely straight inner-city youth, who came up with the idea themselves.

Stephen Alexander is changing hearts and minds in rural Rhode Island, where he grew up playing girls sports.

Micah Porter is a successful high school track and cross-country coach in Colorado. He talks about being gay and his former marriage to his co-coach.

The game was a thriller. After leading by 9 with under five minutes left, Saunders let Nanuet creep back into the game, which was tied with 30 seconds left. After a missed Saunders layup with seconds remaining, Nanuet grabbed the rebound and called a timeout with 0.3 seconds left. There was only one problem: They didn't have any timeouts left. Game MVP Dijon Gonzales buried two technical free throws and Saunders walked away with a 55-53 win.

"We played with some jitters our first game of the season," Nicodemo told Outsports after the game. "We played not to lose rather then playing to win down the stretch. Sometimes you get lucky in this game and the basketball gods were looking down on us today."

Nicodemo told Outsports before the game that he was focused but nervous. He didn't know what kind of reception he would get from the crowd or how his team would react. For most, thankfully to Nicodemo, it was just another game -- even if it was a milestone for Nicodemo and the increasing number of out LGBT coaches.

You can watch video highlights of the game here.

Saunders is back at it on Monday, with a game against Early College at home, part of the Yonkers City Tournament. In January, Nicodemo is taking the team on a big road trip to Kentucky. 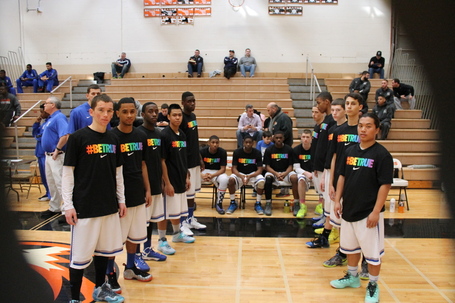