A look at the 12-team field and their strengths and weaknesses. Plus, Week 17 notes and our hot player of the week is a champion for gay rights.

Share All sharing options for: NFL: Let the playoffs begin

A look at the NFL as we head into the playoffs.

Prior to the season, I picked a Seattle-Denver Super Bowl, and with both being No. 1 seeds, I see no reason to change that. However, only once since 1994 have both top seeds won their conferences (Colts-Saints in 2009), so odds are that one of them stumbles. And in six of the last eight seasons, the Super Bowl winner played in the wild card round.

Here is how I see each playoff team heading into the postseason:

AFC (in order of seed)

1. Denver (13-3)
Why they'll win the AFC: They have been the conference's best team from the start and set a slew of scoring records, averaging 37.87 points a game. Assuming Wes Welker comes back, they have four receivers who can dominate. Plus, Peyton Manning is having his best season and Denver has home field.

Why they'll fall short: No Von Miller really hurts their pass rush, meaning more time on the field for the defense, which puts even more pressure on the offense to score when they get the ball. Denver committed nine turnovers in its three losses, so the Broncos can be careless with the ball.

2. New England (12-4)
Why they'll win the AFC: They have the game's best coach in Bill Belichick, who always finds a way to get an edge. Their four losses are all by seven or fewer points and they have a running game that can play keep-away with the likes of Denver.

Why they'll fall short: Seven of their wins are by seven or fewer points and they are a handful of plays away from 8-8. This is due to killer injuries to the likes of Gronk, Vince Wilfork and Jerrod Mayo that have made them a much-less talented team, one hard-pressed to keep up with Denver, especially on the road.

3. Cincinnati (11-5)
Why they'll win the AFC: They have the AFC's best defense, despite some injuries, and can get after the quarterback. They have some scary skill guys like A.J. Green and Giovanni Bernard. They already beat the Patriots and can hang with Denver.

Why they'll fall short: Andy Dalton inspires zero confidence, as likely to throw a pick in a key setting as complete a pass. Plus, they're the Bengals, whose last playoff win came against a team that no longer exists (Houston Oilers, 1991).

4. Indianapolis (11-5)
Why they'll win the AFC: They are peaking at the right time, with three straight impressive wins. Andrew Luck never seems to be out of any game. Any team that beats Seattle, Denver, San Francisco and Kansas City can win any game.

Why they'll fall short: Luck often runs for his life with a porous offensive line. They have had a bad habit of falling behind by a lot early, which is deadly against good teams in the playoffs.

5. Kansas City (11-5)
Why they'll win the AFC: Their eight Pro Bowlers leads the AFC and shows their talent. The defense is getting healthy at the right time and Alex Smith has become an effective passer. Jamaal Charles is the most explosive back in the AFC.

Why they'll fall short: They have exactly one win against a team that made the playoffs, but that was in September against an Eagles team that  has since changed quarterbacks. Their defense has come up small against good quarterbacks and they won't be facing Case Keenum, Matt McGloin, Jeff Tuel or Jason Campbell in the playoffs.

6. San Diego (9-7)
Why they'll win the AFC: Two six seeds have won it all since 2005, and the Chargers are coming in on a roll. They have only one bad loss (at Oakland, of all places) and went into Denver three weeks ago and dominated the Broncos.

Why they'll fall short:  They looked anemic in losing to the Bengals at home and now have to travel to Cincinnati in the wild card round to face a team unbeaten at home. Their defense won't be able to hold up having to face Andy Dalton, Peyton Manning and Tom Brady in consecutive weeks, a likely scenario if they want to reach the Super Bowl.

1. Seattle (13-3)
Why they'll win the NFC: They have the league's best defense and a ridiculous home field edge. They also play their best in the marquee games.

Why they'll fall short: Their offense disappears at times and they don't have a great set of wideouts, putting a lot of pressure on QB Russell Wilson. They might get into dogfights with great defenses like the 49ers and Panthers, and those games can go either way.

2. Carolina (12-4)
Why they'll win the NFC: They have a stellar defense, one equipped to win home or away. Cam Newton has become clutch.

Why they'll fall short: Their offense struggles on the road and aren't the kind of team capable of falling behind by double-digits and rallying.

3. Philadelphia (10-6)
Why they'll win the NFC: Nick Foles doesn't make many bad plays and the LeSean McCoy is the best back in the NFC. Chip Kelly has this team playing consistent football.

Why they'll fall short:  Their defense doesn't scare anyone and Foles is basically a rookie who would have to likely win two road playoff games to advance to the Super Bowl.

Why they'll fall short: Their defense is mediocre and they've lost their last three to their first playoff opponent, San Francisco. Rodgers can only do so much.

5. San Francisco (12-4)
Why they'll win the NFC: The Niners have won six in a row and are playing great defense and running the ball well. They've been here before and know how to win playoff games.

Why they'll fall short: They are 3-4 against teams with winning records and have been blown out in their last two visits to Seattle. Playing in Lambeau is January is never fun.

6. New Orleans (11-5)
Why they'll win the NFC: Drew Brees always gives them hope. That's about all I got since I think they have very little chance to go far.

Why they'll fall short: This team stinks on the road and every playoff game for them as long as they remain alive will be a road game. The same offense that scored six touchdowns at home on Sunday has managed three total in its last three road games. No way this team wins in Philadelphia, Seattle and then (likely) Carolina in consecutive weeks.

Week 17 notes: What a choke job by Miami. Win one of their last two and the Dolphins make the playoffs. So much for that. They lost both and managed one touchdown combined against the Bills and Jets. … Peyton Manning's 55 touchdown passes is a record that will last for years as long as the NFL doesn't expand to 18 games. Another quarterback would have to average 3.5 TDs a game to top it. … Hope you had Patriots back LeGarrette Blount in fantasy – 189 yards rushing and two TDs and two long kickoff returns. A Bill Belichick gem he swindled from Tampa Bay. …

Horrible officiating likely cost the Steelers a playoff spot when the refs blew a field goal violation against San Diego that would have given the Chiefs a second try at winning the game, knocking the Chargers out and getting Pittsburgh in. Then again, if the Steelers had not lost to either Oakland or  Minnesota (a combined 9-22-1), they wouldn't have needed help to get in. … The Lions crushed Green Bay, 40-10, on Thanksgiving and needed to only go 2-2 to win the division. They went 0-4, making them the season's top chokers. …

Dallas finished 8-8 for the third year in a row. It's also the fourth time in six years the Cowboys lost a Week 17 playoff play-in game. The team's biggest problem is its general manager, who also happens to be the owner, Jerry Jones. As long as he refuses to let others pick the personnel, the Cowboys are doomed to mediocrity. He's becoming Al Davis, the later years.

Hot player of the week: Philadelphia Eagles linebacker Connor Barwin. He is the only pro athlete to ever contact Outsports to talk about his support for gay rights. He is proud of his openly gay brother and gave us a great interview where he expounded on his views. Sunday against Dallas, with the NFC East title on the line, he came up big, none bigger than his batting down a Kyle Orton pass on fourth down at a key moment in the game. Besides, how can you not like a guy who once wore what a teammate called "the sluttiest uniform ever worn in a playoff game"?

Here is a shot of Barwin showing his guns in the snow: 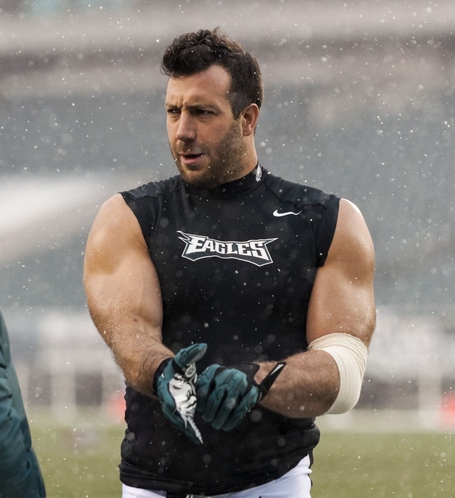