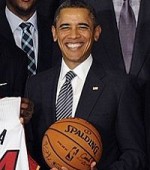 In what is almost certainly a first, an American president has endorsed a bid for a city to host the Gay Games, when President Obama put his support behind Orlando's bid to host the Gay Games X in 2018. The news, first reported by Watermark, came in the form of a letter to the Orlando organizing committee:

"I am committed to advancing equality for the Lesbian, Gay, Bisexual and Transgender (LGBT) community, both in America and around the world. For over 25 years, the Gay Games have built an international legacy of changing cultural, social and political attitudes toward LGBT people across the globe.”

The president cited Orlando's tourism infrastructure as a reason the city would be an ideal host. The letter also cites estimates of 14,000 athletes and 200,000 visitors, though my more than 20 years of covering the Gay Games shows that bid committees always shoot high in their estimates.

Obama's endorsement is another sign of the mainstreaming of gays into society. At one time, this would have been controversial but now it's just a matter of protocol since these events do bring in tourists (and their money). He is also not the only head of state to endorse a Gay Games bid in this cycle -- British Prime Minister David Cameron, along with London Mayor Boris "Zipline" Johnson, gave their blessing to London's 2018 bid last month. Last fall, France's prime minister endorsed Paris' bid. The other cities bidding are Amsterdam and Limerick, Ireland.

Orlando is bucking some history -- after San Francisco hosted the first two Gay Games in 1982 and 1986, the U.S. has not hosted consecutive events. Gay Games IX will be held next year in Cleveland. The Federation of Gay Games will announce its selection this fall.