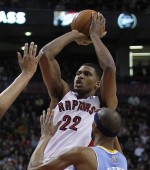 From the Department of Wonderful Coincidences: Rudy Gay of the Toronto Raptors hit a jump shot with less than five seconds remaining Tuesday night to beat the Denver Nuggets, 109-108. The shot happened on Proud to Play night, honoring PFLAG and EGALE, the biggest Canadian LGBT advocacy organization. Daniel Engel, a fan, sent Outsports this:

"I was at the game. I was not there as part of the 'Proud to Play' night; I hadn’t heard of it until last night when the group was shown on the Jumbotron for about 15 seconds. To my recollection, they were the only group shown on the Jumbotron the entire game, and they were clearly identified as an LGBTQ group (as a side note, a couple sitting behind me was trying to figure out what the ‘Q’ stood for).

"When the group was shown, they waved rainbow flags, and there was no reaction by the crowd – good or bad. As you are probably aware, the Raptors are owned by Maple Leafs Sports and Entertainment, an organization that, in my opinion, generally has a good record on gay issues."

Gay joined the Raptors in a trade on Jan. 30, right in time for the Proud to Play night. I wonder if the American Family Association's website, in keeping with past practice, referred to him as "Rudy Homosexual."

To future continue the gay theme, here is shot from the game of Gay being guarded by Kenneth Faried of Nuggets (center), who has two moms and is now an ally in the fight for gay equality in sports: 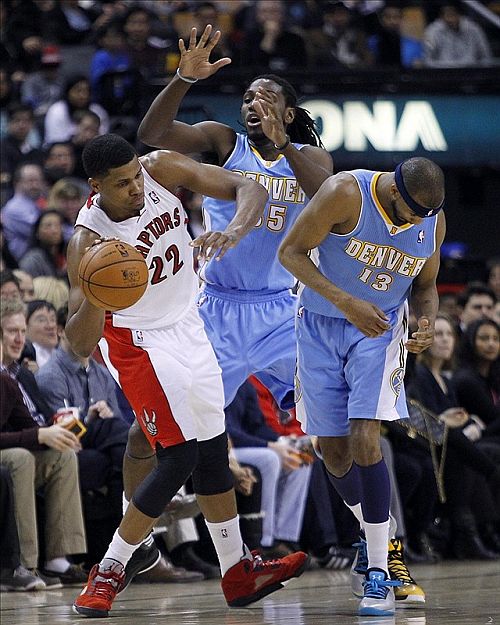