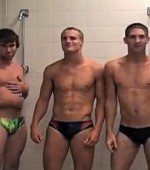 Until about an hour ago, I had no idea what the "Harlem Shake" was, but apparently all the kids are doing and it is taking schools by storm. It's basically people badly dancing to a beat, starting with somebody in a mask and breaking into a mass of them shaking and baking.

It's become a big deal for college swimming and diving teams, a great excuse to watch guys showing off in their swimsuits. In my quick search, I found 9 schools participating (videos below), plus a hot one from three dudes in their Speedos, and one from Norway, where two of the guys seem to be enjoying each other in the shower. The one from the University of Georgia swimming and diving team has an amazing 19 million page views.