Indianapolis Colts head coach Tony Dungy will be the honored guest of the Indiana Family Institute at the group's "Friends of the Family Banquet" in March. The organization, among other things, fights the right of same-sex couples to marry and the right of gay people to adopt children in Indiana. 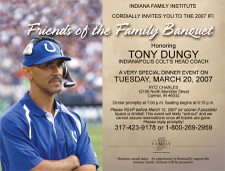 The event's invitation (right) features Dungy in his Colts sideline uniform. There is no price listed but the invitation reads: "An opportunity to financially support the Indiana Family Institute will be presented."

IFI is affiliated with Focus on the Family, a rabidly anti-gay organization that has made it its mission to oppose gay marriage rights, among other issues of gay equality. Focus on the Family hosts a conference series called Love Won Out, which asserts that gay people can be "cured" of being gay. Among the group's online initiatives is No Moo Lies, which claims that, because dogs can't moo like a cow, people aren't supposed to be gay.

"We believe firmly that the family is the key institution of society, and that the overall health of any city, state, region or nation is largely determined by the health of this bedrock institution," the group's Web site reads under the heading, Our Mission. "Our objective is two-fold: Preserve pro-family policy already within State Government and push for additional policies that will strengthen Indiana families."

IFI is one of the leading proponents of Senate Joint Resolution 7, an initiative in Indiana to include a ban on same-sex marriage in the state constitution.

"SJR7 is being debated today in Indianapolis," said Jay Cook, an Indianapolis resident. "It's getting little to no coverage because of the Super Bowl and Colts coverage."

SJR7 was passed on Wednesday by the Senate Judiciary Committee, 7-4. If the bill passes the General Assembly as it did two years ago, it will go to a popular vote for adoption in 2008.

The reason for Dungy's support of this organization is unclear. Repeated attempts to contact IFI and the Indianapolis Colts were not returned. The team is presently in Miami preparing for its appearance in Super Bowl XLI.

The Web site bilerico.com did reach Nicole Duncan, director of community relations for the Colts. She told the site that she knew nothing about Dungy's involvement with the group.

"He does a ton of fundraising dinners," Duncan said. "I can't comment. I haven't seen this."

Dungy brings Christianity to the Colts

Dungy has a long, vocal history as a devout Christian. He has often made religious comments in his remarks to the media, and after the Colts' AFC Championship victory over the New England Patriots, Dungy said that God was responsible for their victory.

When Dungy became the head coach of the Colts in 2002, he created a plan with team chaplain Ken Johnson to instill more religion into the team, including a Bible study with the coaches every Tuesday morning, a Bible study with the players every Thursday night, and chapel services four hours before every game.

"Some of our past coaches had the perspective that, even though God and religion are important, football comes before your family and your religion. With a guy [Dungy] who emphasizes Lordship you understand the Lord is first, then your family, and then football," Johnson told the Florida Baptist Witness in 2002.

Dungy told the same publication that he is very clear with people that he is not just spiritual.

"Whenever I'm asked to talk about it I make sure people understand my affiliation as a Christian, that I follow Christ and Christ's teachings according to the Bible," Dungy said in 2002.

That is that same Bible that many religious and anti-gay organizations, including IFI, have used for decades to fight gay rights, saying that the Bible makes homosexuality a sin.

While many in Indiana may be encouraged by Dungy's support of IFI and his promotion of religion on his team and in the media, others are discouraged.

"While I appreciate and like to see Coach Dungy being recognized for his hard work as a great NFL coach, I'm troubled by his upcoming appearance with the IFI," Cook told Outsports. "Since Central Indiana taxpayers are, in a sense, buying the new stadium for the Colts, it seems odd to me that Coach Dungy would be attending an event sponsored by a group that attacks a group of Central Indiana taxpayers who are fans of the Colts and want to see Indianapolis be a truly wonderful world-class city."

Lucas Oil Stadium is expected to be the new home for Dungy's Colts as of the 2008 season.

Dungy's opponent in Super Bowl XLI will be his friend Lovie Smith, head coach of the Chicago Bears and also a devout Christian. Smith has said in the past that he does not smoke, drink or dance because they are against his religion.

Smith was asked Tuesday if the NFL was ready to embrace a gay player.

"We don't try to judge people's lifestyles and things like that," Smith said, according to the Pittsburgh Tribune-Review. "We don't get into people's personal lives in that way. We judge players based on one thing: Can they play football? If you can play football, you can get into the locker room."