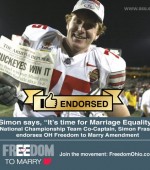 Simon Fraser, a linebacker on Ohio State's 2002 national championship football team, has endorsed a proposed amendment in Ohio that would legalize same-sex marriage.

“Now is the time to end marriage discrimination in Ohio," Fraser said. "Among great American traditions are: equal treatment under the law and religious freedom for all. These principles do not conflict, but exist in harmony. This amendment respects a religion’s right to recognize or not recognize marriages while putting all Ohioans on equal footing. I support the Amendment and ask my fellow Ohioans to do the same."

Signatures are being gathered by Freedom Ohio to get the Freedom To Marry and Religious Freedom amendment on the November ballot. The group needs 386,000 signatures to get it on the ballot.

Fraser was a scholar-athlete award winner at Ohio State and went on to play three seasons with the Cleveland Browns and one with the Atlanta Falcons. A 2011 article in the Columbus Dispatch details how Fraser decided to enroll in medical school after doctors saved his son who was born prematurely.