Share All sharing options for: Gay 49ers fans kissing in bar in Sports Illustrated photo are from San Diego 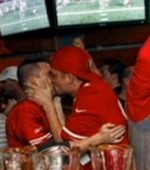 Part of the SI photo by Deanne Fitzmaurice

Outsports was the first outlet to report on the photo in Sports Illustrated that showed two male fans kissing in a San Francisco gay sports bar after the 49ers beat the Atlanta Falcons to reach the Super Bowl. We called it a first and the kiss photo went viral.

It turns out that, thanks to intrepid reporting by Roman Jimenez of the San Diego Gay and Lesbian News, that the two guys live in San Diego and traveled to San Francisco to watch the game with 49er fans at Hi Tops. They are also not boyfriends. Aaron Ochoco, a state of California worker from Mira Mesa is a 49ers diehard (that tells you how bad the Chargers have been lately) who converted his friend Greg to the cause. Ochoco initiated the kiss.

“If I remember correctly,” Ochoco told SDGLN, “the kiss occurred after Navarro Bowman knocked down Matt Ryan’s fourth-down pass. I grabbed Greg and kissed him.”

For his part, Greg, who preferred not to use his last name, jokingly told SDGLN, “I was not involved” in the kiss. A close look at the picture shows Greg was like a purse in a roller coaster — more or less along for the ride.

The two are not a couple and they are not dating. They are simply friends who met while playing softball.

The day after the Super Bowl, which the 49ers lost to the Baltimore Ravens, Ochoco was bummed ("the Super Bowl result was rough") and still amazed by how much attention the kiss had gotten, telling local Channel 10:

"I was really surprised it was such a big deal, because it was just a kiss at the bar," said Ochoco. "It's little things like this, I think, that breaks down barriers."