A gay sportswriter says thanks to Brendan Ayanbadejo

Share All sharing options for: A gay sportswriter says thanks to Brendan Ayanbadejo 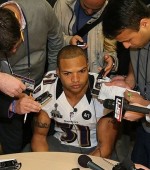 Chuck Culpepper has a great column in Sports on Earth talking about meeting Baltimore Ravens linebacker Brendon Ayanbadejo after the AFC Championship Game. I worked with Chuck years ago in Pasadena, Calif., and have always admired his work. I knew he was gay but also knew he wasn't public about it in his profession.

I am that exotic creature, a gay male sportswriter, but on this frigid walk I was thinking only of Baltimore's rout of the Patriots and how it had sustained my sense of the Ravens' uncommon camaraderie. Hoping to learn more about a cohesion I had admired for five years, I joined the reporter scrum at linebacker Terrell Suggs' locker, known to be a harbor of humor and insight.

Just then, before Suggs spoke to us, I looked off to the right to see a big bruiser of a man pulling on his haberdashery at a locker beneath the numeral "51." Six years of living overseas had blurred my player-recognition skills and jumbled my recall of jersey numbers, so I had brought along a lineup card. I fished it from my pocket and found the "51."