Ed is a New England Patriots fan who follows the Instagram feed of Patriot defensive players Dont'a Hightower and Alfonzo Dennard. When Dennard on Tuesday posted a photo of himself wearing a Yankees hat, Hightower dropped a "no homo" on him in a comment that left Ed upset and he called out the player.

Here is the exchange on Dennard's Instagram account. @fonziedennard is Dennard's handle and @zeus30 is Hightower's (the rest of the commenters are followers of Dennard's account). The comments all deal with Dennard's Yankees cap photo: 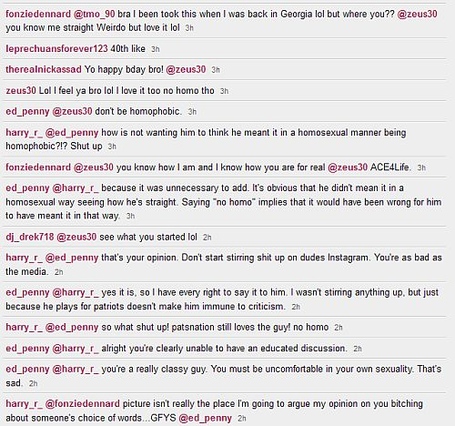 The kicker here is Ed's sexual orientation. "I'm not gay," he told Outsports. "It's just something I hate to see people being against as I know a few gay people and those kind of comments annoy me. For all the progress made in the NFL recently, there has often been an incident that follows that shows that this is still a large issue."

The fact that Ed is not gay shows that more people are getting fed up with anti-gay language and are calling out people who use it. "No homo" does not strike me as hateful, but more showing the insecurities many men feel about anyone getting the slightest idea they might be gay.

Had Hightower simply wrote, "I love it too," it would not be an issue, but then he had to add "no homo," so there was the overt statement that he was 100% hetero. And, of course, fan @harry_r had to stand up for Hightower simply because he's a Patriots fan and add his own gratuitous "no homo." The whole thing is more lame than anything. Real men are secure enough not to have to resort to using it and we need more allies like Ed to stand up and say that.