Gay Athlete Climbs Mountains For A Cause

Cason Crane has only two more of the world's tallest mountains to climb as he raises money and awareness for gay youth suicide prevention.

Share All sharing options for: Gay Athlete Climbs Mountains For A Cause

Sometime in mid-July, if all goes according to plan, Cason Crane will stand on the summit of Denali in Alaska, the tallest mountain in North America, mission accomplished. He will have climbed the top of the tallest peak on all seven continents, becoming the first openly gay climber to do so and in the process raise money and awareness for gay teen suicide prevention.

Crane, 20, will enroll this fall in Princeton, but he's not thinking about school right now. His journeys have taken him all over the world and his Rainbow Summits Project was the perfect vehicle to marry his love of climbing with his advocacy for the Trevor Project, which seeks to stop suicides in LGBTQ youth. Crane has to be tough and resilient to conquer mountains, but he says he meets young gay people all the time who have their own battles that are harder than his because theirs is against homophobia. He recounts one meeting last November when he gave a talk on his project in Virginia.

"There was one kid who came up to me and he was very interested in athletics and was a runner," Crane said. "He said he can't even go to a football game without being beaten up. He said his mom won't even let him go to a football game because she's worried about his safety. He was still in high school. He showed me some text messages he had gotten since he was openly gay and I just thought. 'Oh my gosh.'

"I'm so lucky to have had such a positive experience and I'm doing this project for kids like this who have had a much tougher time, who deal with this every day, who love sports but are afraid to even go to sports games for fear of being beaten up or called names and that just shouldn't happen. … He's way more courageous than I am and it shows true character to do what he does every single day."

Crane has already reached the summit on five of the seven mountains. He will arrive in Nepal April 1 to begin preparations for climbing Mount Everest, the world's tallest mountain and hopes to finish by mid-May. After that, it's on to Alaska and his second attempt at Denali. The seven peaks are: Mount Everest in Nepal (Asia); Cerro Aconcagua in Argentina (South America); Denali in Alaska, also known as Mount McKinley (North America); Mount Kilimanjaro in Tanzania (Africa); Mount Elbrus in Russia (Europe); Vinson Massif (Antarctica); Carstensz Pyramid in New Guinea (Australasia). 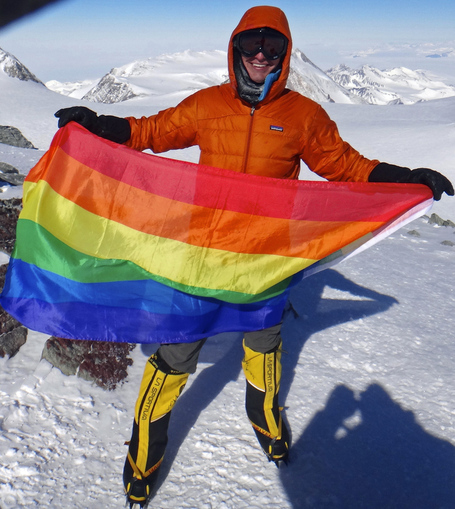 (Cason Crane on the summit of Vinson Massif in Antarctica.)

Crane, who lived in Hong Kong from ages 1-6 and the rest of the time in Lawrenceville, N.J. outside Princeton, was a multisport athlete in cross-country, track, swimming and diving at Choate Rosemary Hall, a private boarding school in Connecticut. He did not have a traditional coming out story since he was really never in the closet. His parents, David Crane and Isabella de la Houssaye, and family were supportive as was Choate, but Crane does remember feelings of being different as an openly gay high school athlete.

"There was definitely some name-calling," he said. "There definitely was a cold atmosphere towards me in the locker room. There were very few instances of open homophobia but I certainly was not the average Joe in the locker room. We had these big group showers and people would walk in and walk out and not try to shower when I showered. I really didn't mind. You have to learn to get over that."

He recalls only one outright instance of homophobia and it came during a track meet. "At one of our championship track meets, these runners from another school were calling me names and cat-calling me before our race," he said. "It really did bother me and I was upset but I channeled it into my running and won the race. That was my revenge."

The Rainbow Summit Project was born from tragedy. As a junior in high school, one of Crane's friends committed suicide. He was further shocked in 2010 by the suicide of Tyler Clementi at Rutgers, someone he did not know but whose story touched him. "Confronted by the tragic deaths of my friend and Tyler and witnessing daily the trials and tribulations facing LGBTQ youth, I felt compelled to work to make things better for these youth," he wrote in an essay on his blog. Climbing mountains to raised awareness was his contribution to the Trevor Project, as are the more than $105,000 in donations he has raised for the group (you can donate here).

When he reaches a summit, Crane pulls out a rainbow flag to honor the occasion, though there was one instance where his mother put a stop to it.

"I have encountered some homophobia," he said about his climbs. "After talking with my parents, I have not been as openly gay on some climbs as others. I don't hide, but I don't always bring my rainbow flag to the summit. On my climb on Mount Elbrus in Russia, I was determined to bring my rainbow flag to the summit and my mother literally went into my suitcase and hid it. She said, 'Cason, this is crazy. I'm concerned about your safety, so you can blame me.' Russia is obviously a very difficult place to be gay."

Despite traveling to parts of the world not gay-friendly, the irony is that it was in Alaska where Crane experienced his most open instance of homophobia. He and his team were on the way up to the summit and stopped at a base camp. In tents next to them were a group of disabled climbers, who were on their way down after being unsuccessful in reaching Denali's summit.

"I was very excited to meet them but they were not so excited to meet me, unfortunately." he said. "I put my rainbow flag on my tent and they said nasty things, the F-word and said some nasty comments about why I was wanting this and being so flamboyant.

"That was really unfortunate, but I really honestly believe they had a really rough time because they didn't [reach the] summit. So they were mentally in a really tough place and we all say things we don't mean. ... I tried to be optimistic, even though I was pretty hurt. ... I would like to think that if they had summitted, it would have gone differently."

When Crane climbs, it always with a team that can be as many as nine other climbers plus guides, all of them strangers. He was asked how he brings up the fact that he is gay and what his mission is.

"I'm pretty obviously gay, I'll tell you that," he said laughing. "My pink compression socks and rainbow flag definitely confirm things for people who are questioning.

"Seriously, there are a sizable minority of climbers who are doing these climbs for a cause and it's one of the first things that comes up. And once the rainbow flag comes out, everyone on the mountain knows."

Being a competitive athlete, Crane is no stranger to training and he is focused now on being in the best shape possible as Everest and Denali loom. At 6 feet tall and 158 pounds, he wants to add a few pounds since all climbers lose weight due to a lessening of the appetite at high altitude and the rigors of a climb. The physical aspects are the easy part, he said.

"What it really, really requires more than anything else is mental fortitude to just put one foot in front of the other for six, seven, eight hours a day for weeks at a time. Overcoming obstacles -- physical, mental, emotional – thinking you won't ever be able to make it, thinking you won't make it up the mountain and just somehow committing until you get up to the top safely and back down safely."

His parents are able to financially support his climbs, which allows all the money raised to go directly to the Trevor Project. As he takes each step higher and higher, he never loses sight of why he is doing this.

"The responses I've gotten from other young LGBTQ people and especially athletes are so inspiring to me. It's my motivation as I go on these climbs. I speak at schools and share my project with them and I love talking to other young people because each of them has their own story and I love hearing how my project encourages them to pursue their own dreams and to do it in an open way. ...

"Each and every one of them can and should climb their own Everest, whatever it is and I just hope I can make the most of this opportunity."

Check out Crane's progress on his blog.
Donate to the Trevor Project via Rainbow Summits.