NOM claims the Bears made a donation to their cause and support their message. The Bears deny it. Group raffling Urlacher, "Sweetness" paraphernalia.

The National Organization for Marriage, which fights against marriage equality, is claiming that the Chicago Bears made a donation to their Ruth Institute, and that the Bears are "supporting our message." However, in a statement released to Outsports today, the Bears deny that relationship:

"The two items featured in The Ruth Institute gala invitation were personal donations to Dr. Jennifer Roback Morse. Neither was a club donation, nor do they represent the team's view on any social issues. Any remarks stating otherwise are false."

When asked who made the personal donation, team spokesperson Jared Ellerson would not elaborate. Dr. Morse is president of NOM's Ruth Institute. While the Bears may not have donated to Ellerson as a team, someone at the team clearly did.

"The Ruth Institute markets itself as hosting a conference for college students about marriage," Campus Pride's Jess McDonald told Outsports. "But in reality it's about anti-gay efforts and ways to challenge LGBT inclusion on campuses and in communities. They link LGBT people to pedophilia and abuse, and they support ex-gay therapy. So we were alarmed when it looked like the Bears were supporting this institute"

Earlier today, Equality Matters posted this snippet from the NOM Web site, specifically claiming the Bears were in full support of their anti-gay campaign: 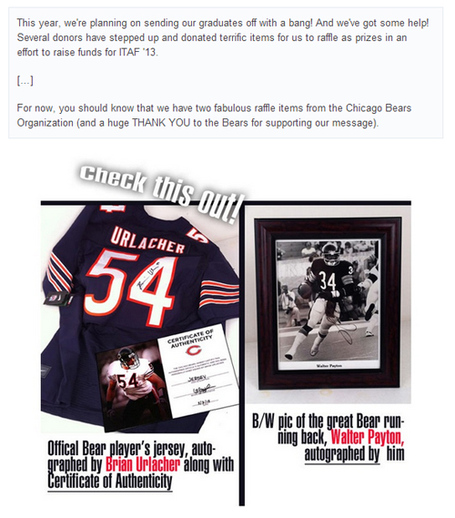 Whoever made the donation, it's sad that someone in the Bears organization would donate the likenesses of great athletes like Walter Payton and Brian Urlacher to a bigoted cause.