Nate Diaz is a moron and so is his manager. The UFC fighter was suspended after he tweeted this: 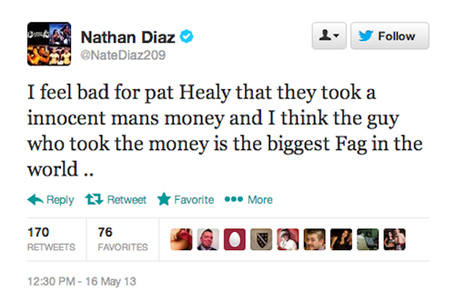 He was referring to a recent incident in which fellow fighter Pat Healy was docked $130,000 in bonus money after testing positive for marijuana. $65,000 of that money-which was awarded to Healy for getting the Submission of the Night at UFC 159-was then given to Bryan Caraway, who was the only other fighter to get a submission at that event. For this, Nate Diaz thinks that Caraway is a "Fag."

Diaz's manager Mike Kogan took the idiocy one step further by saying that where Diaz is from, "fag" means "bitch." His explanation is MMA Junkie is a doozy:

"Guess what? The word faggot, at least in Northern California, and where Nate is from, means bitch. It means you're a little punk. It has nothing to do with homosexuals at all. So when Nate made the comment that he made, he didn't make it in reference to homosexuals or calling Caraway a homosexual. He just said it was a bitch move."

Nice try, but all Kogan did was make himself and his fighter look even dumber. The UFC said Diaz is suspended pending an investigation. The first step should be to buy Diaz and Kogan dictionaries, assuming they can read.