Out College Basketball Player Happy Being Just One Of The Guys

Share All sharing options for: Out College Basketball Player Happy Being Just One Of The Guys

--He was born 20 years ago in Blue Springs, Missouri, to Tim and Chantelle Messersmith during March Madness and the 1993 run by Michigan's Fab 5. He was named Jallen (pronounced Jalen), a mash-up of his middle name, Allen, with the first name of then-Michigan star Jalen Rose.

--He was raised a Mormon.

--He was bullied so badly in pre-adolesence that he was home-schooled.

--He plays college basketball for Benedictine College in Atchison, Kansas, a small liberal arts Catholic school and was fourth in the nation in his division in blocked shots this past season.

A 6-8, 215-pound openly gay Mormon basketball player at a Catholic school in Middle America Kansas seems an anomaly. Messersmith, though, fits in perfectly with his teammate and was embraced after he came out last fall, first to his coaches and then over time to his teammates. To them, he's just Jallen.

"He's a very outgoing player and if you need an example of a hustler, it's him," said Benedictine guard Brett Fisher, Messersmith's teammate and best friend. "He's doing the dirty work for the team. He's getting the blocks on defense, he's getting every rebound. We like him on the team."

Messersmith contacted Outsports about telling his coming out story prior to NBA player Jason Collins declaring he is gay ("I think that's awesome," he said about Collins). He appears to be the first gay men's college basketball player to come out while still playing; Villanova's Will Sheridan came out after he graduated. "When I came out, there was nobody in my sport I could" relate to, Messersmith said about why he agreed to share his story. "I always wanted to put it out there and I had a great experience with it and I wanted to show people it could be fine."

He admits to being petrified prior to coming out to the team, but a story he tells from this past season shows how readily he has been accepted in the locker room.

"I had gone on a date the night before and Brett came up to me when there were a group of us and he asked, 'So how did your date go last night?' And I was like, 'Well, we just kind of did this and this.' And Brett said, 'What else did you guys end up doing?' And I said, 'Well, we kind of just did stuff and we had fun.' And he was like, 'No, if I'm going to tell you specifics about what I did on my date, you're going to tell me specifics.'

"It told me that I can be open about my personal life and people would listen and give input. It's like nothing different. I'm just one of the guys, who happens to like guys. He eventually got it out of me, though it took some prodding."

"We teased him a little bit about his date the way we tease each other," Fisher added.

This kind of locker room chemistry is why Messersmith is so comfortable talking about the present, even though remembering the past is often painful.

He was raised in a loving household along with a sister, 18, brother, 15, and recently, two adopted brothers from foster care, 8 and 7. He has 23 cousins on his mother's side and he inherited his athleticism from his dad, who played basketball, football and ran track in college. His mother knew Jallen was not like other boys from an early age, he said.

"When I did come out, my mom said she knew that I was different but that she didn't know why," he said. "Growing up, I was always the really quiet, shy, nice and sweet kid. The story she brought up to me is when I was younger, I was in dance and tap and I was the only guy in class. All the girls wore pink. I had to wear everything black. I came home one day and I said I wanted to have the pink shoes and they wouldn't let me. At that point, she knew something was different."

Growing up Mormon (he has since left the church), Messersmith would hear regular denunciations of homosexuality, but at home his family was giving him nothing but support, as if they sensed his true orientation. "My mom had told me all growing up that if for some reason somebody was gay, they would support them. But going to church, all I heard was 'this is bad, this is bad, this is bad.' When I heard stuff like that, all I did was try to get away from it," he said.

What he couldn't get away from was the constant verbal bullying from other kids, that was at its most vicious from ages 8 to 13. "Growing up, I was always picked on," he said. "I seldom had a guy friend growing up. I was lonely and didn't have any super-close friends. Some days I would go to my room and just cry about it. It was something I kept to myself."

Intensely shy then, he kept the worst of the bullying secret from his parents. They knew enough, though, that the bullying was one reason his mom home-schooled Jallen for two years. He entered high school and the bullying continued, though at a lesser intensity. Messersmith found his refuge in basketball, another irony for someone wrestling with their sexuality. Sports are often not seen as a sanctuary for gay teen boys.

"The people making fun of me pushed me into basketball further and made me want to be the best at basketball and get somewhere with myself," he said. "After my sophomore year, I didn't care what people thought. I grew stronger because of it and it rolls off my back now."

He was a good enough player at Blue Springs High School (where he was named MVP, Mr. Hustle, Mr. Defense and Mr. Basketball) to get some scholarship offers, and chose Benedictine in part to stay close to his family. His parents, though now divorced, have not missed one of his games in high school or college. 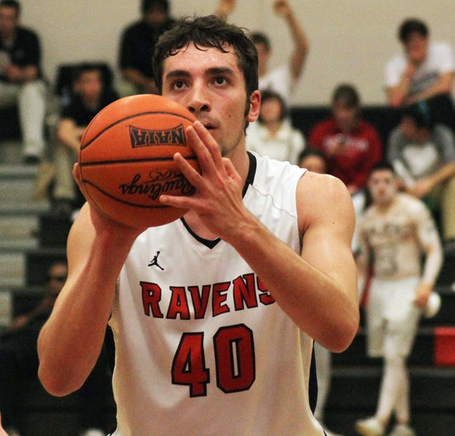 Messersmith thrived at Benedictine in his freshman year, but was still not out to anyone. A tragedy jolted him into action.

"My freshman year, one of my teammates passed away in a car accident [in December 2011]," he said. "When that happened, I looked at myself and asked 'What am I? What am I doing?' At that point, I had accepted that I was gay. Seeing him die young and in such a sudden manner, I didn't want something that was such a big part of what I am to be hidden. I wanted it to be something I was out about, I was proud of being and that people accepted me more. I did not want that to be hidden for the rest of my life."

At the end of the spring semester 2012, he told his parents he was gay, and they were unconditionally supportive. He then decided to tell his team, but had major anxiety over the decision and saw a counselor to help. "During the summer I was petrified to tell my teammates," he said. "I was scared to come back and I honestly didn't know what they were going to say. I was just scared and I didn't know what to do."

Messersmith decided to first tell his coach, Ryan Moody, at the start of fall semester 2012. "It was hard," he recalls of the conversation with his coach. Moody, however, took it in stride and offered unconditional support. The next day, Messersmith met with Moody and his two assistants.

"They were there 100% for me," Messersmith said. "They said it would not make any difference in the way the team was run. And they wanted to make sure it wouldn't change my experience at the school. That was awesome. After that, I felt like I could do anything."

Up next was to start telling his teammates, and Messersmith did not want a big coming out scene in the locker room. "I didn't want to draw a ton of attention," he said. "I was going to be gay and have this side of basketball. I wanted it to be that I was still a basketball player who just happened to be gay."

"I actually was surprised to hear that," Fisher said after his mom told him, "but I brushed it off. We were going to be friends forever. I accept him for the person he is. It's still a normal friendship for us."

Fisher said the news was passed around from teammate to teammate over time. "Everybody was cool with it and nobody said anything bad about it," he said. "They know what's up and he is treated similar to the way we treat every other teammate."

Despite the reactions from his coaches and Fisher, Messersmith admits he had major anxiety about the whole team hearing he was gay. This stemmed from a discussion in the locker room in his freshman year.

"A year before there was a locker room conversation and one of the guys on the team was having a kid. We discussed if we had a kid and they were gay, what would happen. Things were said like 'I would try and change them' or 'That's not OK.' It kind of freaked me out a little bit. I was not sure how they would respond to that kind of thing."

Their response was, in a good way, almost no response. He was not treated any differently, and in fact, one of his teammates who had expressed reservations about gays said he changed his mind after hearing about Messersmith.

No longer the shy pre-teen, Messersmith would bring boyfriends to games this past season. "I would hug them and then I would get grilled by my teammates after," he said. "We would have locker room conversations and they would talk to me about guys just like they would talk about girls to each other." Teammates gave him additional ribbing once when he was prepping for a post-game date by taking extra time in the locker room making sure he looked good. He jokingly suggests his teammates might be a little jealous, saying, "I've definitely gone on more dates than most of the guys combined."

This past season was a good one for Messersmith and Benedictine basketball. The Ravens went 18-12 before losing in the quarterfinals of the Heart of America Athletic Conference tournament. Despite playing in about just half of his team's minutes, Messersmith led the Ravens in blocked shots (53), more than the next three players combined. His blocks ranked him first in the conference and fourth nationally in Division I of the National Association of Intercollegiate Athletics. The NAIA is a collection of small colleges, but has sent players like Scottie Pippen and Dennis Rodman to the NBA.

Off the court, Messersmith, an accounting major, loves playing the piano, drawing and reading, and next school year is the Junior Class Treasurer. Despite the total acceptance as him an openly gay student-athlete, he is cautious about advising others deciding whether to come out.

As he reflects on his life entering his junior year, the days of being bullied and crying in his room seem like ages ago. Jallen Messersmith is thriving at Benedictine and he wouldn't want to be anywhere else.