Michael Austin says he proposed a column about LGBT issues. Now he's out of a job.

Share All sharing options for: Former editor believes he was fired by Coach and Athletic Director magazine in large part for gay column

Austin, who is straight, began working with Coach And Athletic Director magazine as a freelance writer 11 years ago. He was hired as the managing editor in 2008 and was named the editor in chief in 2011.

On Jan. 4 of this year, Austin submitted his plans for an editorial column about gay issues in sports. Austin claims that within two hours he was told that the column he had written exclusively for almost two years was being taken away from him. A trip he was taking on behalf of the magazine to a trade show the following weekend was immediately canceled.

"I somewhat anticipated they wouldn't love the topic, based on what I thought their ideals were," Austin said. "I anticipated push-back, not that the column would be pulled. And they told me they don't believe the topic fits with the Coach and Athletic Director vision statement and is of limited interest to readers. The people who were above me are very religious and never shied away from that, which is why I expected some push-back."

Austin claims the magazine has never published an article dedicated to LGBT issues in sports in its history. A review of all the magazine's tweets over the last 12 months reveal none mentioning LGBT topics despite the predominance of stories on the issue in the last year.

On Feb. 1, Austin says he was fired by Sharpe. Austin claims Sharpe's cause for the firing were phone records that showed Austin had been speaking with a former employee who had left the company to start his own publication. Austin says his former co-worker was a friend of his, and that their communications were strictly friendship-based. Regardless, Austin claims he had never been instructed to discontinue communication with his friend and former Lassiter Publications employee.

"They didn't like that I kept in touch with him," Austin says. "But no one ever said, don't talk to him."

Following his firing, Austin filed for unemployment benefits in his home state of Oregon. He claims the state determined he was not fired with cause, and that the cause given by the magazine was "suspect." His unemployment-benefits claim was approved.

Austin said the column would have run in the magazine's February issue and would have been timely to the point of being prescient.

"You look at everything that has come up in the last three or four months," he said, "the timing was so right. If I'd have had the chance to write that column, it would have had a strong impact."

You can read the column Austin had planned to write below. 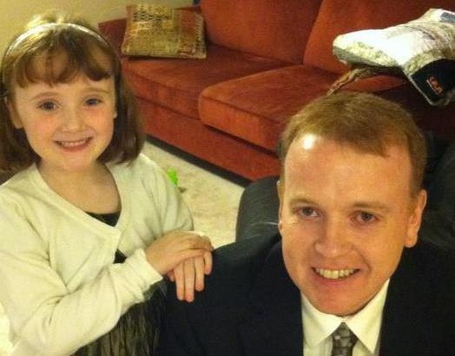 Michael Austin (right) with his daughter

Creating An Atmosphere Of Inclusion For ‘The Invisible Minority'

It's not about affixing a rainbow bumper sticker to your car. It's not about marching in a parade. It's not about changing your philosophy on marriage. But, it is about 47.8 percent of heterosexual high school students participating in athletics compared to just 23.2 percent of their LGBT (lesbian, gay, bisexual and transgender) counterparts, according to the Gay, Lesbian & Straight Education Network (GLSEN). It is about creating an open atmosphere where all athletes feel safe, loved and valued regardless of to whom they are attracted.

"Gay student-athletes can be invisible on scholastic sports teams because you can't just look at someone and know they are gay," says Dan Woog, the head boys soccer coach at Staples High School in Westport, Conn., a member of the Connecticut Soccer Hall of Fame and an openly gay man who is the author of 16 books, two of which cover the topic of gay males in athletics. "It's easy to think they do not exist and it's not an issue in your program. The gay athletes are the invisible minority."

This minority remains invisible as coaches and athletic directors stand idly by while gay slurs are tossed around a locker room. It's hard to feel comfortable in an athletic setting with your peers when you constantly hear the word "gay" used to mean weak, soft or not as good, or when the term "fag" is spewed by individuals who have no other way to tear down someone else. In the 2011 National School Climate Survey conducted by GLSEN, which featured responses from 8,584 student respondents, 84.9 percent of LGBT students reporting hearing "gay" used in a negative way while 71.3 percent heard homophobic slurs frequently at school.

Athletics is supposed to provide a refuge for all teenagers to escape from the rigors of the classroom and pursue activities of particular interest to them. That becomes hard to do when the feelings deep inside someone constantly are under attack.

As the coach or athletic director, you set the tone. It's your locker room. You make the rules.

"We're finding the use of slurs is dying down considerably when coaches make a big deal of it," Woog says. "Address the behavior and it will end. But, if you allow it to become part of the background noise, then athletes feel like they have the approval of the coach to use that language."

Beyond simply forbidding hateful language in your locker room, look to create a more open atmosphere for all athletes to compete on your teams, regardless of sexual orientation. Yes, this helps the LGBT students feel more accepted but also shows your heterosexual athletes how an inclusive society works.

GLSEN supports schools and administrators in this effort with national campaigns aimed at creating awareness for the invisible minority. Each January, No Name-Calling Week is initiated as a campaign designed to reduce bullying and increasing communication within the scholastic setting. Every April (this year it's Friday, April 19), GLSEN promotes its National Day Of Silence, which specifically addresses sexual-orientation name-calling while encouraging students to take an active stand against anti-LGBT behavior.

Woog, who works closely with GLSEN, says coaches who participate in both the No Name-Calling Week and National Day Of Silence send a clear message to their athletes about the type of program they are running. He also addresses four other strategies for creating an inclusionary atmosphere.

1. Keep Your Ears Open. Pay attention to the news. Right now, the topic of gay marriage is being debated within the United States Supreme Court. And, during the week of the Super Bowl, San Francisco cornerback Chris Culliver made insensitive remarks about the possibility of a gay athlete in the locker room. Use these timely events to encourage conversation among your athletes.

2. Monitor Their Language. Previously mentioned, curtailing slurs is one of the easiest ways to show your stance on bigotry and hate within your program.

3. Use Inclusive Words In Your Language. Woog says instead of defaulting to using a term like "your future wife," say something like, "when you find someone you love." "This kind of subtle message shows athletes there is a big world out there," Woog explains.

4. Urge Athletes Out Of Their Comfort Zone. If you routinely offer suggestions for good books or movies, occasionally suggest one with a gay theme. When doing so, tell your athletes to monitor their reactions.

The world continues to change and evolve. Woog says gay high school athletes today are far better off than even just three years ago due to a shift in attitudes (consider positive efforts made by current NFL players Chris Kluwe and Brendon Ayanbadejo). GLSEN's 2011 survey found a decrease (for the first time ever) in biased language and victimization of LGBT students. Yet, 81.9 percent of LGBT students report being harassed, which shows we're not doing enough. Coaches and athletic directors - it's time to step up, face whatever fears you have, change the culture in your locker room and do the right thing to ensure the safety of your athletes while encouraging those on the sidelines to become part of your program.