Elliot Trotter never saw himself becoming a professional athlete. A runner in high school, he specialized in the 400- and 800-meter races. Football and basketball weren't his cup of tea.

Yet when Major League Ultimate (the "Frisbee" has been dropped from the sport's name) announced its inaugural season and a team in Seattle, Trotter's prospects changed. Today he becomes just the fourth active male pro team-sport athlete in the United States to come out publicly.

Trotter began his Ultimate career at the University of Puget Sound, where he helped form the school's club team in 2004. As a neophyte team in a burgeoning sport, they struggled to compete at a high level, failing to make it to the regional championships before he graduated. (This year, Puget Sound finished second nationally.) While he was a newcomer to the sport, having only played recreational Ultimate in high school, he took to it quickly.

It was also at Puget Sound that he started dating men. It didn't take long for him to come out to his college team.

"Initially it was easier to be quiet about things," Trotter said. "Like many other people, I was very concerned that teammates and friends wouldn't approve. Eventually I had enough confidence to be myself and not shy away from things."

His teammates didn't bat a collective eye, and Trotter was their openly gay team captain his sophomore year.

After graduating, he stayed in the Seattle area and delved deeper into the sport. He worked hard on his skills and found his way onto one of the area's top club teams, Voodoo, eventually being voted co-captain of the team by the other players. 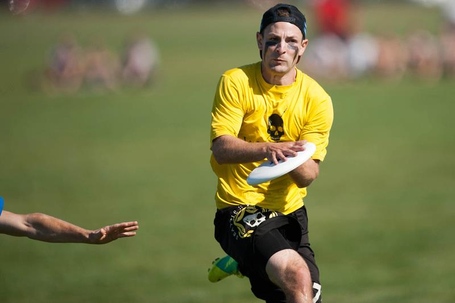 With the formation of Major League Ultimate - and the Seattle Rainmakers team - Trotter saw the opportunity of a lifetime to take his passion for Ultimate to a new level. He excelled at the Rainmakers tryouts and made the team primarily as a defender, where he specializes in guarding handlers (the "point guards" of Ultimate). On offense, his speed and endurance -- cultivated years ago running the longer sprints in high school -- makes him an ideal cutter (the "wide receivers" of Ultimate).

So far this season Trotter, playing on the defensive team, has scored five goals on 11 catches. The Rainmakers are currently tied for first in the Western Conference.

Just as in college, Trotter has found acceptance for his sexual orientation at the club and professional levels.

"I've never experienced anything negative from a teammate," Trotter said. "Most teams I've played on have been so committed to winning and being better that the fact that I was gay was never a big issue."

While Trotter doesn't wear a big rainbow flag on his chest or talk much about being gay, there's no doubt everyone on his current team is well aware.

"I don't know that it always came up in conversation," he said, "but teammates come up to me and say things like, 'I hear you're gay, just wanted you to know I'm cool with that. It wasn't something I needed, but it's a good thing to hear."

He's now so comfortable with his sexual orientation in the sport that he doesn't shy away from bringing men he's dating to games. Trotter knows that small act - showing up with a man on his arm - is something sports fans simply haven't witnessed very often.

"It's not something I see in major sports or in ultimate," Trotter said. "I certainly am aware of the fact that doing something like that, even in a city as progressive as Seattle, is not a regular occurrence. But I haven't gotten many looks about it. People have been interested in talking with whomever I bring to a game."

While he's experienced overwhelming embrace by the ultimate community, there have been rare moments of casual homophobia that made him stop in his tracks.

"I remember someone talking to me on the sideline and saying something was 'gay,'" Trotter remembered. "It was frustrating to hear. I felt like I was attacked, even though he didn't know who I was. But I don't hear that kind of stuff often, if at all. It's been an outlier. It's part of what has attracted me to this sport. Generally the sport has been accepting and very conscious of diversity."

While ultimate is hardly a major sport in the United States, it is on the rise. It's an exciting, high-scoring game that lends itself to big plays. While football fans witness occasional 50-yard touchdowns, they're regular staples of ultimate; High-level ultimate players have the ability to throw the disc from end zone to end zone - all in the air - in one play. Last year's inaugural season of the American Ultimate Disc League (the second U.S.-based pro ultimate league) was featured repeatedly on ESPN SportsCenter's top plays. This year, Major League Ultimate is broadcasting its games online via YouTube.

The LGBT community is also taking to the sport. The world's first gay ultimate league, Big Gay Frisbee, had its inaugural season in Los Angeles earlier this year. Other gay leagues are expected to start play in various cities in the next 12 months.

Trotter is part of the push to grow the sport. He is involved with the team behind Rise Up, an organization that teaches and coaches the sport of ultimate; He's currently in Amsterdam conducting a series of ultimate clinics. He's also the editor in chief of Skyd magazine, a top source for ultimate news.

Trotter hopes his coming out publicly inspires others across sports to do so.

"I'm not trying to set myself up as someone to look up to," he said. "If people want to see me like that, I'm happy to be there for them. What I hope to do is be someone who's there and out and encourage people to be who they are. And if enough people do that, we can change the culture of sports."

You can find Trotter on his blog and on Twitter @DangerLamp.

Windmill Windup 2012: Interview with TD's Frans and Fred (via skydmagazine)