French Olympic swimmers Florent Manaudou and Frédérick Bousquet have posed for an intimate photo in a campaign against homophobia started by photographer Olivier Ciappa.

The photo project is called "imaginary couples" and one of them is of the two French swimmers. Ciappa described the pitch he made to the two swimmers:

"You're with the person you love. Not a man, not a woman. Then, at the session, I disappear, for they are one with each other."

In real life, Bousquet is partners with Manadou's sister, Laure Manaudou, and the two have a daughter. The photo of the two swimmers was posted on Ciappa's Facebook page and has been shared more than 7,800 times. The photos are on exhibit in Paris through the week. 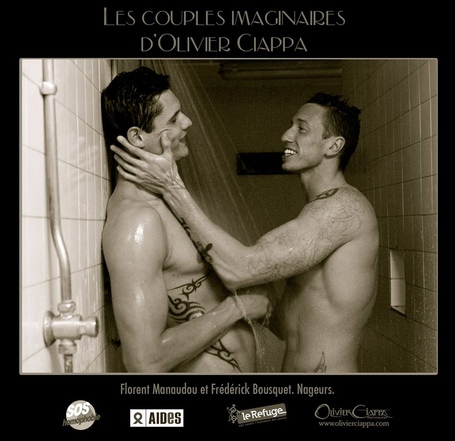 Hat tip to Marc Naimark of the Federation of Gay Games.