Athletes, sports media celebrate the end of the Defense of Marriage Act and Prop 8

The Supreme Court of the United States today struck down the Defense of Marriage Act and effectively killed Proposition 8, legalizing same-sex marriage in California.

Here's how various people across the sports world reacted:

Happy for California, but was truly hoping they would do the right thing. #NotEnough #Noh8

And shame on the justices who voted for DOMA, they will be hard pressed explaining themselves to their grand kids…evolve already!!!

My wife to our girls: "This is a perfect example of when we know better, we do better." #Equality

Federal benefits for all marriages! I didn't think I would be so emotional over a ruling I expected. Tears of joy!!

This is a step in the right direction!! Now let's continue to move forward towards equal rights for every LGBTQ... http://t.co/EbvaWkBTaD

Now that SCOTUS has done the correct thing, we must continue the fight for equality in ALL. 50 states!!!

A monumental birthday present: Supreme Court knocks down DOMA. Federal recognition. A gift of incredible importance for all LGBT #doma

I cried on @HannahStormESPN shoulder in the green room at #ESPNWimbledon when I heard about #doma decision. Then I got back to work.

I don't even know why I respond to some of these #DumbDumbs - this is a great step forward for our country.

Pleased with the decision, I wish it were more decisive. I fear many more legal battles to come on marriage equity. http://t.co/L6oFl1Kqkn

What a glorious day! #DOMA struck down by Supreme Court as unconstitutional! A huge thank you to all those who fought for us & supported us.

Just woke up. Love what I'm waking up to #DOMADead #hegone

I am proud to be me, in the land of the free today! I can't wait till the day when all the labels will be gone and all will be #equal #NOH8

As for the haters and the naysayers, it's perfectly fine. Right now, we know by every single metric that we can identify that the battle for rights is being won effectively, quickly, and broadly. There are still places ... I mean look where we stand right here in Pennsylvania, but this is a tidal wave that is washing over the country right now. The people out there shouting the loudest from the rooftops screaming that this is wrong, they are wrong, and historically and contemporaneously we're learning that.

My plane landed, and the world is a slightly better place. Huzzah. #ishouldtakemoreplanetrips, #correlationiscausation

Even if being gay was a choice, so what. People choose to be assholes and they can still get married.

Just finished training and could not have received better news. Yay for the gays! 👭👬❤🌈

Glad to see that #SCOTUS got it right today. Makes me and whole lot of other people very happy. An end to #DOMA and #Prop8 #equalityforall 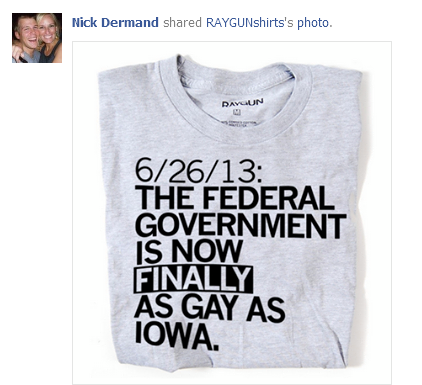