Fonua nearly turned down the chance to carry the Tongan flag in London... but thought better of it

Share All sharing options for: Gay Olympic swimmer Amini Fonua on coming out at Texas A&M and carrying a national Olympic flag

Editor's note: Amini Fonua was an openly gay swimmer at Texas A&M, where he became a top swimmer in the Big 12. He was also the flag-bearer for Tonga at the 2012 Summer Olympic Games.

The reason I've had such a great experience at Texas A&M is because I have some of the most amazing teammates in the world. We're honest and we hold one another accountable because that's what makes a winning team.

Your teammates see the best and worst of you. They see you tear up when you make your first NCAA meet; They see you scream at others when they leave early off the wall at practice (the ultimate pet peeve for any swimmer). We have memories, stories, and moments that will forever bind us together for life. There's no room for lies and there can't be any walls. If there are walls, they need to be torn down for the sake of the team's success. If a person has a wall up, they never lasted long on our swim team. There were some who couldn't adjust to our truthful culture, which meant they quit or were cut from the team.

I chose the tougher choice to be truthful and honest.

I've never felt any reason to hide. When you're self-conscious about anything -- your appearance, your age, your sexuality -- it tends to be the first thing people notice. Everybody is a little self-conscious; It's what makes us human. If you accept who you are and achieve the level of comfort to own it and embrace it, people will allow you to be you. I've never hidden behind a façade, and because of that people have celebrated me for being the great swimmer that I was.

Being selected Flag Bearer for Tonga in the opening ceremony of the 2012 Olympic Games was a choice made by the board of the Tongan Amateur Sporting Association. The committee selected the athlete with the most decorated accolades. This is going to sound cocky, yes, but becoming the first Tongan to successfully defend my Oceania Championship title in New Caledonia earlier that summer, they felt I was the best fit to carry the flag.

Racing the very first day, I almost declined the offer until I realized what it was that I was giving up: international exposure for Tongan Swimming and Pacific Water Safety. This was why I was there in the first place. There are some purposes in this world that are bigger than our own, and this was one of them.

Was I openly gay to Team Tonga at the Olympics? To those who asked, yes. To those who didn't, no. It really wasn't an issue. My job was to swim as fast as I possibly could.

There have been a handful of fellow swimmers over my years at Texas A&M that have thanked me for opening their minds and becoming more accepting of the GLBT community. By simply being myself, I'm changing the way people think. Never underestimate the power of your own truth. A line that I repeat to myself regularly and that has become a personal mantra is this:

"Nobody is perfect, I can only be me / And I choose to be that, just perfectly"

As athletes, we always find a way to move forward and get the job done. With swimming, my job was to show up to practice, have high morale, and work hard to make sure that I'm the best swimmer I can be. Those values carried me forward to being elected team captain and lead our Aggies team. The rest of who I was didn't matter.

If you treat everybody without judgment, the sky is the literal limit on what they can accomplish. I accomplished all my swimming accolades without compromising my integrity, not only as a gay man, but more importantly as a human, deep in the country heart of Texas. 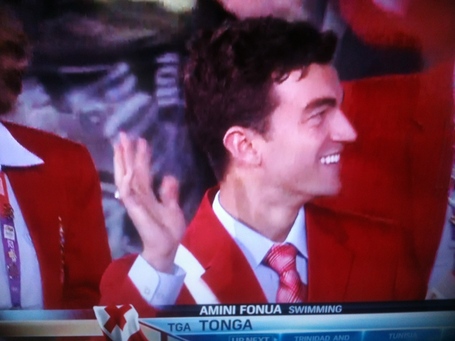 Photos taken from screen captures of the BBC