Gay marriage is now legal in France, but that did not stop a small group of anti-gay marriage protestors from disrupting today's men's final between Rafael Nadal and David Ferrer. One shirtless masked man carrying a lit flare even made it onto the court during the second set with Nadal serving. The man was quickly apprehended.

"It was a very quick moment,'' Nadal said. "I felt a little bit scared at first because I didn't see what was going on. I just saw a guy with some fire and I got a little scared at the first second. But then I saw it was one of these things that nobody can prevent.

"I want to thank very much all the security guys. They did amazing work. They were very courageous what they did so I just want to say thank you very much to them.''

Earlier, some fans unfurled a banner in the stands that said "France tramples on children's rights." Despite a gay marriage law being signed into law last month, sporadic protests have broken out in opposition. I am not sure why the guy was shirtless and carrying a flaming phallic symbol, but then again, it is France.

Once play resumed, Nadal won the match in straight sets.

Video of the incident, with no sound:

Here are some images of the protest by Matthew Stockman of Getty Images (click image for larger view): 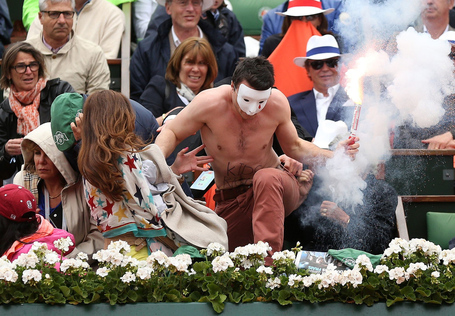 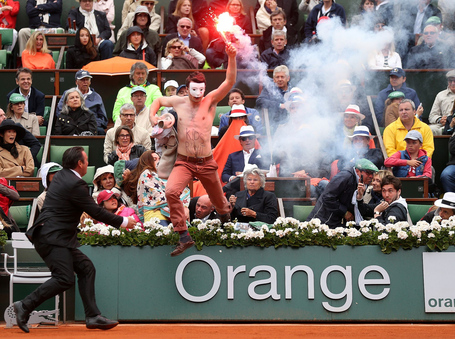