Gymnast Louis Smith would go gay for actor Will Smith

Share All sharing options for: Gymnast Louis Smith would go gay for actor Will Smith

Olympic medal-winning British gymnast Louis Smith graces the cover of Gay Times magazine clad only in a light-blue bikini-type swimsuit (see below). He certainly does not mind being ogled by gay men and even bit when asked if he was gay, who would he want to be with.

"I got asked this the other day ... I said Will Smith. Because he's very dedicated to his family, he's very loyal, funny, hard working and talented. So, in the most non-sexual way, it would have to be based on the person."

I sense the attraction is more than just Will Smith's personality, but it's nice that he played along. Louis Smith also addressed the lack of openly gay athletes, which he attributed to society's perception of what being a man is. He then discussed his sport:

"You know there's been a lot of people that've come out in gymnastics ... because you're always wearing a leotard, it's a very artistic sport, it's not rolling around on the floor getting muddy, so I don't think there's that much pressure."

He's sort of wrong here. While it is true that there are male gymnasts who have been out within their sport or team, almost none have come out publicly while competing and none were out at the London Olympics.

Smith joins the list of straight British athletes who are comfortable being on the cover of gay magazines. Here is the cover of Gay Times: 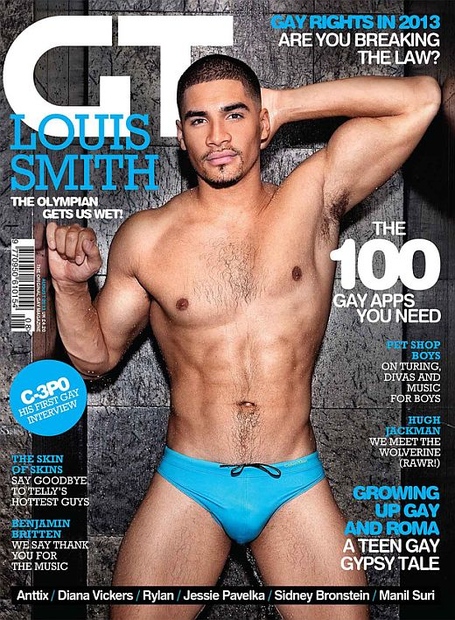