How gay is your favorite NFL franchise?

We rank all 32 NFL teams based on how "gay" they are. Not surprisingly, the Packers are tops. We hope.

Share All sharing options for: How gay is your favorite NFL franchise?

People are often surprised to hear that the most popular sport among Outsports readers isn't diving or gymnastics - It's the NFL. The most-watched sport in America is also tops in West Hollywood and the Castro.

Just how gay is your favorite NFL franchise? Chances are, it's pretty gay...

1) Green Bay Packers
For their name alone, the Packers have been the subject of jokes and laughs from gay comedians for years. Not since the Oilers left the NFL has there been an NFL nickname that better encompasses gay men of every persuasion. Gay NFL fans of other teams - even those in Minnesota - at some deep level wish they were Packers fans. And if the nickname weren't clear enough, they have a big G on the side of their yellow helmets. Gay! Gay! Gay!

2) Chicago Bears
Bears have been a staple of the gay community for as long as it's been around. For the straights: A bear is a hairy, often husky, gay man who is often attracted to other hairy, husky men. A Cub (Chicago fans will be proud to know) is a young bear, whether said young bear is in Yellowstone National Park or Boystown. "Sweetness" indeed. Given the teams in the top two spots, it's safe to say the NFC North is the gayest division in football! And if there's any doubt, there's always this...

3) Cleveland Browns
Not only is their name Brown, and not only is their color brown, but their first head coach (for whom they were named) was Paul Brown, and the franchise's biggest star was Jim Brown. Incidentally, Cleveland is home to Flex, the largest gay bathhouse in America, and will be host to the Gay Games in 2014. The gays are definitely down with the Browns.

6) San Francisco 49ers
The Gay Bowl is the annual gay flag football national championship. The very first Gay Bowl, all the way back in 2002, featured a team from the Bay Area called - wait for it - the San Francisco 69ers. Any team from San Francisco has to be near the top of a "gay list." Between the public nudity and the giant rainbow flagged draped from bay to breakers, the city is the gayest place outside of Palm Springs on Dinah Shore Weekend.

8) Minnesota Vikings
The Vikings have the distinction of being the only NFL team represented by a man with braids in his hair. And as we all learned when some in the religious Right boycotted the Teletubbies because they said Tinky Winky was gay, purple is the gayest color in the rainbow.

10) New York Jets
One of the most beloved Broadway musicals of all time is West Side Story. The show features rival gangs, the Sharks and the (yes, you guessed it) Jets battling for control of an Upper West Side neighborhood. Not so mysteriously, the New York Titans became the New York Jets just two years after the release of the West Side Story feature film. The professional women's football team in New York? The Sharks. Bonus points for Rex Ryan's foot fetish and Mark Sanchez-jersey tattoo.

11) Miami Dolphins
Bet you didn't know that dolphins are one of the gayest species on the planet. That's gay as in homosexual. As in, they have homosexual sex. Yep. Lesbian and gay bottle-nose dolphins swimming all around the coast of Florida. I knew something had to be in the water in South Beach.

12) New England Patriots
Few TV icons are more popular with gay fans than "Patsy" from Absolutely Fabulous. The fact that the nickname has been used for the Patriots for decades is icing on the cake for a franchise that has both quietly and publicly supported LGBT equality for years. On Sundays when the Patriots wear their throwback jerseys - with their old logo featuring a Patriot in a "compromising position" - they jump into the top 10.

13) Philadelphia Eagles
All across the country, gay bars called "The Eagle" have popped up over the years. Whether it's New York City, Los Angeles, Portland or Seattle, The Eagle is home to leather daddies and guys interested in other fetishes like bondage. Unlike in Philadelphia, Andy Reid would be welcome with open arms to any of the Eagle bars.

14) Baltimore Ravens
OK, the Ravens aren't particularly gay, but when Brendon Ayanbadejo was on the team they were a beacon of light for gay fans. Besides, any team that names itself after an Edgar Allen Poe poem and uses purple as its team color is kinda gay.

15) Tampa Bay Buccaneers
The Bucs used to have the gayest logo in the history of professional sports (and that includes the rainbow flag in the old Nuggets logo). It featured a guy with long hair, an earring and a feather in his hat with a sword in his mouth winking at the mostly male fans. What, Liberace wasn't available?

16) New York Giants
Yes, Jeremy Shockey said some nasty things about having a gay teammate. But that was over 10 years ago. Since then, Giants owner Steve Tisch has become a vocal supporter of gay marriage. Besides, for those who think size matters, it's tough to get bigger than a "giant."

17) Kansas City Chiefs
In addition to having the most phallic logo in the NFL, the Chiefs are also well-represented on the Village People by Felipe Rose. There must be some way to work Arrowhead Stadium into "Y.M.C.A."

18) Buffalo Bills
I dated a guy named Bill once. He was cute. Wasn't from Buffalo, but I have fond memories. Very fond memories...

19) New Orleans Saints
The motto, "What happens in Vegas stays in Vegas" has been the rule of thumb surrounding Mardi Gras for decades. And for good reason. Now if we could only stumble across Drew Brees on Bourbon Street and get him to take our beads...

20) Washington Redskins
While the Washington Monument and Lincoln Memorial are lovely, the can't-miss stop in DC is Secrets - The best all-male strip club in the U.S. They even have a monthly amateur contest, but Chris Cooley hasn't shown up yet. One other side note: The one time I met RGIII he was wearing pink socks. It takes a real man to wear pink socks to an NFLPA party.

21) Pittsburgh Steelers
Gosh I wish I was a Steelers fan. The team hands out those Terrible Towels perfectly sized for the night stand. Mine are all white, but I suppose yellow would work too.

22) Houston Texans
I'm ranking them here simply on the promise that everything is bigger in Texas. Everything.

23) Denver Broncos
With Tim Tebow at the helm, the Broncos may have been 10 places higher. Without him, they're... Oh wait! Peyton Manning does those "Double Stuff" commercials. Now we're talking. Who doesn't want to join the Mile High club?

24) Oakland Raiders
I once saw a picture of Al Davis when he was young and commented to Outsports' other half, Jim Buzinski, that I thought he was handsome. Hey, it was a grainy picture! Davis became "Cyd's lust object" until he died. May he rest in peace.

25) Cincinnati Bengals
While the orange is pretty bad, any team that can match its jersey color with the hair of its starting quarterback has to get a little love. Whoever is doing their draft board should apply for a spot on the next Project Runway. 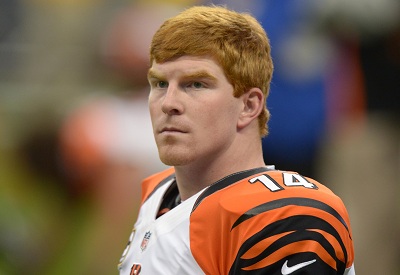 26) Seattle Seahawks
Sorry size queens, the "12" on the fans' jerseys isn't an advertisement. And yes, you can still cheer for Russell Wilson despite the "3" on his chest.

27) Atlanta Falcons
It might be in the heart of the South, but Atlanta routinely makes top-10 "gayest cities in America" lists. Why? Surrounded by 300 miles of country not considered particularly hospitable to gays, Atlanta and its "gayborhoods" have become an oasis for out Southern men and women.

28) San Diego Chargers
Have you ever heard the San Diego Super Chargers fight song? If you ever wondered what Studio 54 and gay discos sounded like in the 1970s, this is it. I dare you to listen without seeing images of sequins and rainbows. "We're gonna dazzle you with our super play." Oh my.

29) Carolina Panthers
I've been to only one Panthers home game in my life, when they hosted the Indianapolis Colts in 2007. And as luck would have it, my all-time NFL lust object, David Carr, was with the Panthers and started the second half when Vinny Testaverde led the offense to five straight scoreless possessions. They lost, 31-7. David never showed up to the gay bar that night for me to console him, but I know he was thinking of me. I just know it.

30) Arizona Cardinals
For years, the Cardinals played in Tempe, Ariz., which at the time was the largest city in America to have an openly gay mayor. This year, the Phoenix area will host the Gay Bowl - It will be the first city to ever host the Gay Bowl twice.

31) Detroit Lions
My partner spent eight years in Ann Arbor. When I asked him if there's anything gay about Detroit, it was a quick "Hell no." You don't get much less gay than Detroit, unless you're the...

32) Jacksonville Jaguars
Teal? What, mauve was taken? No NFL teams' color scheme is as dated as the Jaguars, and the gays do know their fashion. If they do in fact move to Los Angeles, change their colors and become the Hollywood Hookers, their standing on this list would change fast.