Help send Blake Skjellerup to the Winter Olympics by donating to his fundraising campaign.

Over the last six weeks we've heard lots of ideas designed to combat the new anti-gay laws in Russia during the Winter Olympics.

Yet there will be no boycott of the Olympics. The Winter Games won't be moving to Vancouver. And as a chorus rises for athletes to wave rainbow flags at the Opening Ceremony, the International Olympic Committee has made it clear those athletes would face disqualification.

Blake Skjellerup will be our symbol.

Blake is an out and proud speed skater hoping to compete on the ice in Sochi. He skated in the 2010 Winter Games in Vancouver before he came out. In Russia early next year, Blake taking the ice can bring hope to LGBT Russians and galvanize our community around the world during this high-profile spectacle. Nothing is a powerful in changing hearts and minds as out LGBT people showing up and participating!

Maybe most importantly, his participation is a statement the IOC and the Russian government can't do anything about.

If he qualifies for Sochi, Blake will be the first publicly out male athlete to compete in a Winter Olympics. We've had women like Ireen Wust skate after coming out. There was John Curry, who was outed shortly after his competition had completed. But a gay man has never competed in the Winter Olympic Games after coming out publicly. Ever.

Blake Skjellerup can be the first. On Russian soil. With an entire community behind him.

But first, Blake needs our help. Speed skaters don't make a lot of money. For years he's been living in Calgary, 7,000 miles away from his parents and friends, with a cousin to save money. He takes the train over two hours a day to get to his training center. When I asked him about the financial reality for Olympic speed skaters for Out magazine, he summed it up pretty clearly:

"Bankruptcy! And a heavy amount of credit card debt! The reality is that Olympians like myself pour our hearts and souls into our sports! We do it not for money, but for the love of our sport."

As it stands, Blake will attend the crucial World Cups alone. He currently doesn't have the funds to bring his coach and an all-important physio therapist to these Olympic-qualifying races. This is a huge disadvantage for him, as most of his competitors will have this support with them.

That's why the You Can Play project, Outsports, GLAAD, the StandUp Foundation, Out magazine & the Advocate, along with many other individuals and organizations, are lining up behind a new fundraising campaign to send Blake to the Olympic qualifiers, and on to Sochi, with all the resources he needs.

The campaign aims to raise at least $15k. This will get Blake some of what he needs at the key World Cup races and the Winter Olympics. The ultimate goal of the campaign is to raise the full $33k that will send Blake all of the resources he needs to compete at his highest-possible level at the Olympic qualifiers and the Winter Olympics themselves.

Donation levels start at just $10. For just $200, Blake will send you a personal post card postmarked from the Olympic Village in Sochi - an incredible memento of your support of this out LGBT athlete at the Winter Games! The Advocate and Out magazine are offering free one-year subscriptions for donating $50; StandUp magazine offers a subscription as well! At $1,000, Blake will do a one-on-one video Skype chat with you! He'll happily share stories about his experience at the Olympics, and you can ask him any questions you have!

Plus, your company or organization can place its logo on Blake's uniform at the World Cups for as little as $5k! It's an incredible opportunity for any brand to support the man who could - and should - be the Winter Olympics' first publicly out male competitor as he aims to qualify for the Games!

The Russians and the International Olympic Committee want our furor to go away. They want the Olympics to be void of statements about human rights and LGBT equality. Together, we can make Blake our symbol. Together, our entire community can help Blake make our collective statement: LGBT people are equal, and we are not going away. 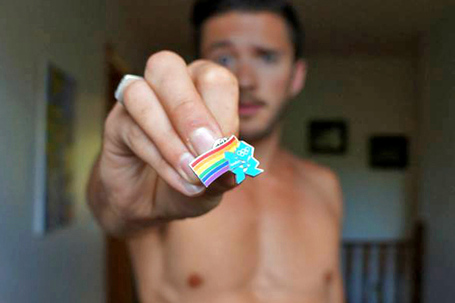