Brittany and Robbie Ross talk about being Christian and loving their LGBT friends in part because of their religious beliefs.

Texas Rangers pitcher Robbie Ross took time off from his team's playoff chase to appear with his wife, Brittany, in a new photo for the NOH8 campaign, which aims to end homophobia and promote marriage equality. The couple was introduced to the NOH8 campaign via Dallas Latos, wife of Cincinnati Reds pitcher and friend of Robbie, Matt Latos.

It was important for the couple to showcase their Christianity during the shoot. Robbie wore a bracelet that said, "In Jesus name I play," a sporty take on a Christian mantra. He also showed off two tattoos, one on each wrist and each featuring the number of a Bible verse: Mark 9:23, which reads (in part): "All things are possible to him who believes"; and James 4:10, which says, "Humble yourselves before the Lord, and he will lift you up."

While it may seem an oxymoron to some for two devout Christians to showcase their religion on a campaign in support of gay equality, it made perfect sense to the Rosses.

"Being in sports, and being around all kinds of different people, you just want to accept everyone for who they are," Robbie told Outsports at the NOH8 campaign's Burbank, Calif., studio. "My wife Brittany and I are Christians, and we believe we as Christians should love everyone and show everyone love, and if this is the best way to do it, then we want to support them."

In organizing the shoot, Brittany said she has been motivated by seeing the way the Bible and religion are used to persecute LGBT people.

"It genuinely breaks my heart," Brittany said. "We're all human, and we can all take things from the Bible and twist them however we want. You can basically take a verse from the Bible and say it's OK to beat your wife, but the world says that's not OK, so that's what we go with. And I think the world is saying that gay people in the community are OK. Jesus came to love people. He never persecuted anybody. There are a lot of confusing things in the Bible, and I think if anything is confusing and it promotes hate, then you're taking it the wrong way.

"Being gay shouldn't just be tolerated, it should be celebrated that people can embody who they truly are," Brittany added. "I think that's the main thing."

Before coming to the shoot on an off day for the Rangers before a series against the Anaheim Angels, Robbie mentioned his participation in the campaign to his teammates in the bullpen. Some said "that's cool," while others questioned why he would participate in a pro-gay campaign as a Christian.

Robbie said he doesn't remember ever hearing a gay slur during his time in Major League Baseball, though he remembers hearing it in high school. He said religion plays a big role on his team.

So what about all the Biblical passages used to label gay people sinners?

"I just don't think it matters if it's a sin," Brittany said. "We all sin, we all know that, so if we just stop focusing on sin, we can start loving each other."

"If you went Biblically off of everything we're doing now, during our every day, I'm sure there are one or two sins throughout our day we don't even realize we're committing," Robbie added.

The couple originally met in high school at Lexington Christian Academy in Kentucky. They said many of their classmates at the time were not particularly welcoming to gay people. Both Robbie and Brittany said they came from families that focused on inclusion; Being an interracial couple, in a high school where Brittany was one of the very few non-white students, reflects their inclusive beliefs.

Ross is a relief pitcher for the Rangers. He has a 4-2 record this season with a 3.32 ERA and 51 strikeouts. The Rangers currently sit a half-game in front of the Cleveland Indians for the AL's fifth playoff spot. Robbie said he's never played with a teammate whom he knew was gay, though the couple said they have gay friends.

Find out more about the NOH8 campaign at their Web site or on Twitter. 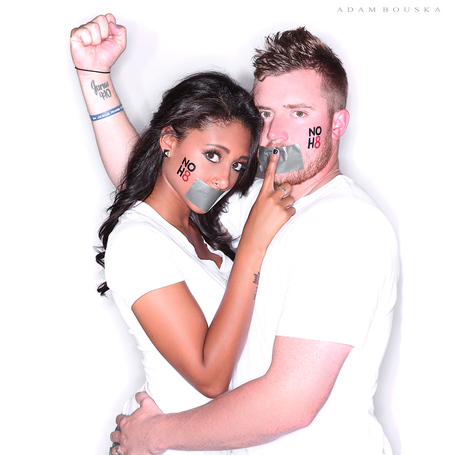