Share All sharing options for: Former Alfred University soccer player on struggling to come out in a rural town

I never understood how I could be so different in a town where everyone seemed to be the same.

I grew up in a small rural town in Upstate New York where at an early age you got use to following the path that was laid out by your parents and grandparents. Everyone seemed nearly identical: income, lifestyle, beliefs, voting. On the other hand, I disagreed with 90% of the beliefs of the town, where there are a dozen last names shared by all 10,000 people. It's a town where the words of Mackelmore -- "God loves all of his children, is somehow forgotten, but we paraphrase a book written 3500 years ago" -- cause an uproar.

The Gainsborough Trinity midfielder was inspired by the coming out of Thomas Hitzlsperger.

High school soccer coach Dan Woog and others will present LGBTQ issues at the National Soccer Coaches Association of America convention this week, part of the association's larger anti-homophobia initiative.

It's a town where everyone knew Rebecca Windover, or at least they thought they did.

At 15 I felt out of place not only in my town, but in my own family. I was beginning to look at colleges while being recruited for soccer. My first college visit in 10th grade lead me to the high school guidance office the next day to see if I could graduate early; It seemed to be its own little planet that welcomed diversity and promoted individuality.

I became angry at the cards that I had been dealt and had many days were I wondered how I would make it to tomorrow. I was sickened by the racial and homophobic comments that stretched through the locker rooms, the town's social media and the lunch tables at school. When you live in an area so void of diversity you begin to think that ever living a different life does not seem like a possibility. I knew the only way for me to escape was to attend a welcoming and accepting university.

As an athlete there was little that I feared. I didn't fear big games, I didn't fear injury and I never feared the big plays. Yet I feared being myself. I had heard the words "lesbian" and "gay" used constantly in the locker room, but only in a derogatory meaning. I can recall too many athletic situations where I was encouraged to play sports, but "not like a lesbian." My desire to play sports made me prone to this title that somehow reflected my athletic ability. I was afraid to be an outcast. I chose to blend in the best that I could.

When I got to college I became the same person in high school that I told myself I did not want to be. I went out and partied. I fell into the typical college stereotype. I did what people wanted me to do, no matter the cost. I wanted to be an athlete and to be open with who I was, yet I chose to hide. I chose to be unhappy and live a secret life.

Every time I went home I had to answer the same question: "Do you have a boyfriend?" It always left me momentarily breathless, ultimately answering the only way I ever knew how: "No, not yet". All I had ever wanted to do was to celebrate who I was. I was never a liar. I was never a quiet person. Now, I was both of these things.

All this time I thought I was alone because of my sexual orientation. If only I had known earlier of Joanna Lohman, Lianne Sanderson, Robbie Rogers, Brittney Griner, Billie Jean King, Pat Griffin and others who navigated the same problems that I was facing, maybe my life would have been different. I made a promise to myself to be a part of the change. I developed the confidence I needed to learn how to walk and take the first steps forward.

I am now 22. I cannot count how many tears I shed and hours of sleep I missed because of four simple words. I have known how to speak for nearly 21 years, and anyone who knows me will tell you I don't shut up. Yet, I was terrified of what my family and friends would say about these four little words. I let the fear of them stop me from being me. A total of 11 characters, four spaces, an a giant explanation mark:

I am a Lesbian!

I feel Ralph Waldo Emerson was speaking to me when he wrote, "Do not follow where the path may lead. Go instead where there is no path and leave a trail."

I cannot explain the relief of telling those around me, who I really am. It took 10 seconds to start living my life as me. When I go back to my hometown, I do not want to live in fear. I do not want to stay quiet for the time that I am home because my viewpoints are different. I am done apologizing for my passions. I am done living in fear of telling the world who I really am. I refuse to continue to lie to myself. I am done trying to convince myself that being me is not acceptable. I am a: daughter, sister, leader, honor student, athlete, employee, friend, competitor ... and lesbian.

I fight for change. I believe in equality. And yes, I am allowed to be all of those things and more. I am me. I will not apologize for being me. Why? Because I am happy, and my happiness is all that matters. My goal is to help others who come from backgrounds that have made them feel inferior and different.

You are not alone. Whoever you are and wherever you are from: I am here and I will help you. You don't need to blend. Although it may seem like the scariest 10 seconds of your life, I promise it'll be worth it! Be true. Be you!

Rebecca Windover is a former student-athlete at Alfred University. Originally from Lowville, New York. Rebecca currently lives in Kent, Ohio and is a graduate student at Kent State University in the Higher Education Administration Program. Rebecca was recently elected to lead the GO!Athletes Higher Education Committee. Rebecca can be reached on Twitter at @bwindover2013 or rwindove@kent.edu 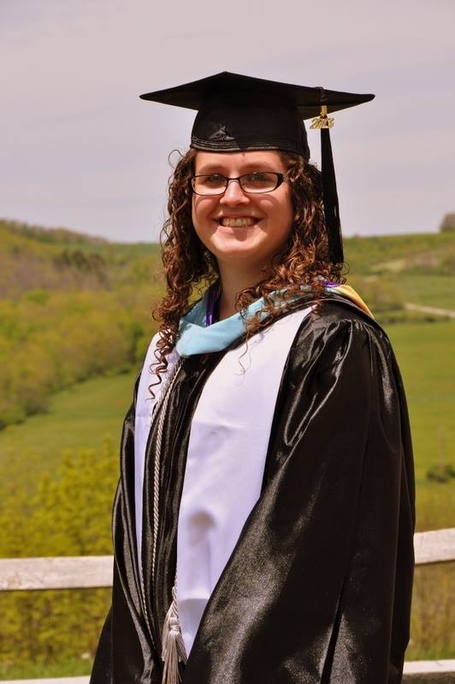