While nobody on the team quite knew how to handle a gay player when Richards came out, the entire Kenyon lacrosse team now again calls him their lax bro.

The Kenyon College men's lacrosse team already knew Holden Richards was gay during fall ball last year. News of the sophomore midfielder's surprising coming out had drifted through the team quickly the previous spring and summer, but the players still didn't quite know how to handle it.

It was a practice last autumn that broke the ice. Richards was locked up in a battle with another teammate during one-on-ones, a healthy dose of body-checking and aggressive play between the two. As the afternoon waned, Richards' teammate took a tough shot that went wide of the goal.

"Suck my dick!" The teammate hollered. It was something the rest of the team had heard from him before, but it was the first time he'd said it with a gay teammate within earshot, and it had never been seemingly voiced directly at Richards.

The team held their collective breath not knowing what to do. Ignore it? Stop practice and chastise the player?

Richards took matters into his own hands. He turned to his teammate, smiled and shook his head.

The entire team erupted as Richards jogged the other direction. Gay or not, he was still one of the guys.

When Richards arrived at Kenyon College from faraway Beaverton, Ore., he was struggling. Kenyon is a private liberal arts college smack in the middle of Ohio, slightly closer to Columbus than Cleveland. It's a religious institution, founded 200 years ago as a seminary and now affiliated with the Episcopal Church.

He had wrestled with his sexual orientation throughout high school, the product of a Catholic household and graduate of Valley Catholic High School. He had attended Nazareth College, a former Roman Catholic institution in Upstate New York, before transferring to Kenyon.

"It was beaten into me every single day of my life that being gay was wrong," Richards said. "Growing up in a Catholic High School was depressing for me. I was chubby, fat and depressed. What else are you supposed to be? You're taught all your life that if you're gay you're going to hell.

"It took until last year to realize it's all a load of bullshit."

It was at Kenyon that he finally opened up to a friend about being gay. The friend directed him to a therapist who could help him navigate his feelings and reconcile them with his past.

"They saved my life. I was on the brink of suicide. Everyone expected me to be the all-American boy, the guy who gets good grades and is the All-state athlete and is supposed to get the prettiest girls."

Truth is, he did get the prettiest girls. He played the part as best he could, making out with girls in front of his friends to keep his cover rock-solid. He even tried having sex with the last girl he dated, but it literally didn't work. Naked and frustrated, Richards turned to the girl and broke the news as best he could. "I'm sorry, but I'm gay."

It was a couple months later that he came out to his fraternity and some teammates without saying a word.

Kenyon holds a big annual end-of-year party for the students called Summer Sendoff. The party is right outside of the Phi Kappa Sigma house where Richards lives with his other fraternity brothers, including lacrosse teammate Colin McMahon.

McMahon and a couple of their brothers headed to the party and saw two men kissing passionately in front of their house. He didn't think much of it until after passing by the couple a second time and realizing one of the amorous men was Richards.

"He was just making out with another dude outside the house," McMahon remembered, laughing. "So I figured, well, I guess that's what Holden wants to do. He isn't shy to express what he wants to do. He has a lot of resilience, screw what the haters say."

At a small school like Kenyon, the word spread quickly. It didn't take long for Richards' lacrosse teammates to hear they had a gay teammate. But it was the beginning of summer break, and word had not yet reached the home of his parents, where he would be spending the summer.

Richards knew he had to tell his family somehow. On a car ride with his parents, he decided to wear a rainbow-colored bracelet he had picked up at Portland Pride in June. When his mother asked him what the bracelet was, he told her where he'd gotten it. His mom got quiet then finally asked, "Are you gay?"

"Yep," was his simple response.

His father laughed. To him, this was a funny joke.

It was quiet for a while until his parents asked him when he chose to be gay.

LeQuan Chapman grew up in a rough neighborhood where "words like 'faggot' and 'gay' were primary in describing all things bad." He discovered sports and became true to himself and is now out and proud.

Chris Voth is a 6-5, 23-year-old volleyball star who trains with Canada's national men's team. This weekend he came out in an article in the Winnipeg Free Press that chronicled his journey.

He asked them when they chose to be straight.

"Both of my parents were mainly worried about my safety and the road ahead," Richards remembered. "And mainly the lacrosse guys, because lacrosse guys can be pretty pig-headed and homophobic."

It was with that trepidation that he returned to Kenyon last autumn. The school year started out a bit rocky, Richards thinking the team didn't want him around and the other players thinking Richards didn't want to be around them. No one quite knew how to handle the whole gay thing.

"You're only supposed to talk about lacrosse, girls - and lacrosse," Richards said. "It was hard for me to fit into that. But once I felt comfortable enough to tell them myself, I realized most of them didn't care, they just didn't know how to handle it."

The issue came to a head one night at a party where several members of the lacrosse team had gathered; Richards wasn't with them. When one of the players used the word "faggot," a teammate told him not to use that word. The player used the word again, and again was reprimanded. The player said "faggot" over and over until finally the other teammate knocked him down. Whether Richards was within earshot or not, that word was not going to be tolerated by members of the team anymore.

"I'd never stood up to guys for saying it," the player said. "But now that Holden, a teammate, had come out, I felt like it had no purpose being said by a teammate of his. Since then, the kid has apologized and said he's taken it out of his vocabulary."

Richards said a lot of the language doesn't bother him, but the word "faggot" gets him every time. When he hears the word on the team, he always says something.

"I think they respect me for telling them it's not OK," Richards said.

The number of occurrences has gone down fast. When a derogatory word does slip out, it's now always followed by a quick apology. When he hears other things - like the "suck my dick" incident - he tries to find a way to send a message while not getting too serious. That's just the kind of guy he is.

"After that, and realizing he was joking around with it, the team is loosening up to the idea and getting comfortable with him just being one of the guys again," McMahon said. "The guys break each other's balls, and after that they realized they could bust his balls too."

It also hasn't hurt that Richards is productive on the field. In his second year with the team, he said he was put in a starting position during fall ball.

"Everyone saw that I was starting," Richards said. "Then they figured if I can play, it doesn't matter that I like boys. And everything was cool after that."

This spring will be his first season playing against other teams as an openly gay man. Richards isn't too concerned about what players from other schools might say to him in the heat of a game.

"It's not going to bother me," said the 6-foot-2, 220-pound Richards. "I'm usually bigger than everyone else on the field. Besides, if anything gets out of hand, the team will have my back."

That team has become very comfortable with Richards. The gay slurs are virtually gone, replaced by the playful teasing every athlete is subject to. Richards even brought his boyfriend, Addison, to a lacrosse party; It went off without a hitch.

As the new year arrived, one question still remained.

During fall ball, the autumn-season varsity teams control the locker rooms; No team showers for the lax bros. It was after a hard conditioning workout to kick off the new year on Tuesday that Richards finally ventured into the shower with the guys as an openly gay man for the first time.

It had been talked about before, a couple teammates assuring Richards they'd jump in the shower if other guys left or acted funny. On Tuesday, there was no need. Richards dipped in a small ice bath with two teammates, then stripped down and headed into the shower. He said he could feel a little tension, but for the most part it was normal conversation with the team. He knew if he went into the showers with confidence and acted like everything was normal, the other guys would respond in kind.

"I think it's going to work out just fine."

You can find Holden Richards on Twitter @holden_richards and via email at richardsh@kenyon.edu. He also frequents Reddit's gaybros and has been to a couple meet-ups in Portland, Ore. 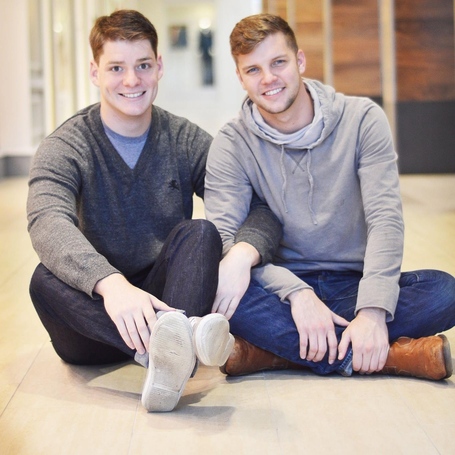 Richards (left) and his boyfriend, Addison. "You don't look gay," Richards' teammates playfully told Addison when they met him.