Scott Cooper had a blast at the Gay Softball World Series, which made going back to real life that much harder.

It happens every time.

I call it the post-tournament blues. It doesn’t seem to matter which tournament I play in or where; it always hits. The bigger the tournament, the more exciting the experience, the harder it sets in. For me, coming off the North American Gay Amateur Athletic Alliance (NAGAAA) Softball World Series last week in Dallas is the ultimate cause of post-tournament blues.

What are the post-tournament blues? It’s the feeling at the bottom of a roller coaster of emotion that causes me to cry as I pack my bags, sniffle as I sit by the check-in gate, and mope around when I go back to work on Monday. I know I am not alone in this feeling.

A weeklong softball tournament may seem like a drain to some people. You live in a hotel (likely with a few other teammates in the same room), share a rental car, eat gas station food on the way to the fields, wake up early for games and wear unlaundered jerseys for four days straight.

But the good outweighs those things. I get to play a sport I love, unleash my competitive spirit, and compete for a World Series title. It's also great to see friends I only get to see at tournaments, meet new people, and hang out at the fields enjoying the sun while watching my fellow athletes give it their all (which involves a dash of glitter).

There are certain moments that make one's week. Watching two gay softball teams under the lights on Friday night with a standing room only crowd gave me  goosebumps. Getting to run into old friends warmed my heart. Spending the down time getting to know other athletes and their stories makes it feel like family. Stepping up to the plate to hit a go-ahead run in a crucial bracket play game was exhilarating. 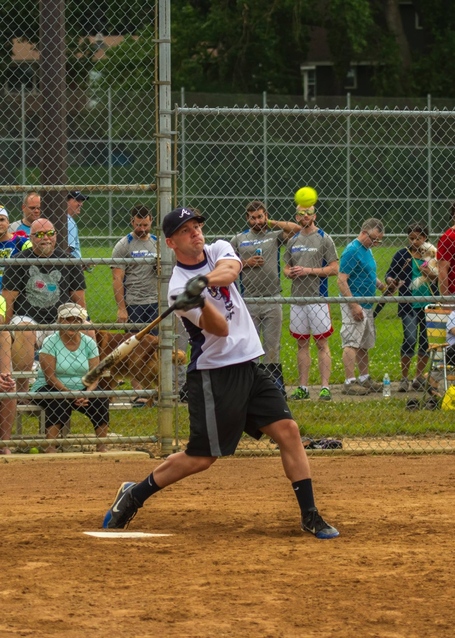 Photo by Triquetra Productions
The athletes and fans (gay, bisexual, and straight allies) create an unforgettable experience every trip.  The games are intense, the tournaments are well run, and the down times are just plain fun. You know you’re in a community of people who really do value who you are as a person, and also appreciate you as an athlete. It’s not easy competition, and the wins are hard earned.

I don’t know the folks who founded NAGAAA and softball tournaments, but I thank them. They established an athletic organization that has brought great joy to my life as well as the lives of many athletes and fans around the country. Because of them I get another athletic outlet to compete in, as well as a supportive and inclusive environment to be welcomed in to. I’ve met wonderful people along the way, played in intense games, and even won a couple of trophies.

But most of all, the tournaments give me this post-tournament blue feeling. And even though it doesn’t feel good, I know that I have it because of the amazing experience I had in Dallas, and have had at every other tournament I’ve gone to. I think the term "bittersweet" is appropriate here.

So thank you softball players, fans, host venues, and the folks who put on this and every tournament. It brings happiness to so many lives.

And I’ll ask what every other softball player is asking this week: When’s the next tournament?

Scott Cooper is a member of the Twin Cities Goodtime Softball League in Minneapolis, and was openly gay on his college football team. Scott has been playing NAGAAA softball since 2010, and has competed in numerous tournaments around the country. He recently competed with his team, the Minnesota Freak, at the NAGAAA Softball World Series in Dallas, Sept. 23-27. He can reached via email at shc2112@hotmail.com or on Twitter @shc2112.