Bruce tells Sam to get off his knees and "submit to God fully."

Bruce told Sam via instagram to get off his knees and "Submit to God fully": 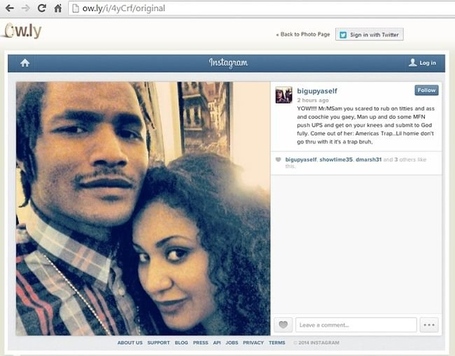 Turner took to Twitter to offer his thoughts about a gay player in the locker room. From Winnipeg Free Press:

You Can Play, which has strong ties to Canadian sports and the NFL, issued this statement:

"You Can Play commends the CFL for the quick and decisive condemnation of the homophobic statements made. Those statements are out of line with the beliefs of the CFL, it's member clubs, and the vast majority of it's players and fans. We have been in close contact with the CFL for some time as we move towards a formal partnership, and we know the league is strongly committed to an inclusive sports environment."

The full statement from the CFL reads:

"The comments made by these players are extremely disappointing and do not represent the CFL's views or the views of the vast majority of our players," said CFL Commissioner Mark Cohon. "The CFL is supportive of openly gay athletes in professional sports and we commend the courage shown by Michael Sam. During the off-season, we have been working with an organization that specializes in this subject and look forward to announcing a formal partnership with them in the near future."

As per league policy, the amounts of the fines were not disclosed.

"Our organization supports all types of diversity. Every individual is unique and free to make his or her own choices. We evaluate players, coaches and support staff based on their skill set and not by gender, colour, religion or sexual orientation. The Montreal Alouettes have a simple criteria to determine who can be a member of our organization. We seek individuals who will make a positive contribution to our team goals and to the Montreal community,'' said Alouettes General Manager and Head Coach Jim Popp.