Ryan in Russia: Rainbows near Sochi, and explaining football to Russians

There I am standing on the roof of our hotel, watching rainbow light shows all around me, listening to THAT song ... and I'm in Russia?! It was surreal.

Share All sharing options for: Ryan in Russia: Rainbows near Sochi, and explaining football to Russians

Editor's Note: You can read all of Ryan's stories from Sochi in our storystream.

The most important thing I had to coordinate before I left Los Angeles? Making sure we could watch the Super Bowl in Sochi. As a life-long and long-suffering Seahawks fan, it was paramount we got the game. Or really, that I got the game, because obviously it was all about me.

And while there's no need to rehash the complete undressing of the G.O.A.T. offense, I'll keep my gloating short.

SEA! HAWKS! Hahaha: Elway (we Seattleites will forever be tickled pink to finally get the best of that man). Also, you fine folks from Denver still have twice as many Lombardis, twice as many Stanley Cups (don't forget about those 1917 Seattle Metropolitans!), the Rockies have at least been to the World Series, and your basketball team still exists. You get no sympathy from me.

Anywho ... my Seahawks fandom is no secret around FOX Sports, and since I hired our satellite truck, they were more than happy to make sure I got the game. Word got around, and since the game was on FOX in the States, a few media outlets like USA Today and Yahoo! Sports wanted to watch with us in our hotel lobby on the big screen. Some US Figure Skating reps were supposed to join, but getting lost around here is easy. The roads in Sochi/Adler were already a cluster F, and with all the secured areas and lanes created for the Olympics, you damn near need a Sherpa to get around.

Fun side note: the set-up here is similar to the Giants and Jets. Their branding screams "MANHATTAN!" But really, they're in Jersey. A little less sexy on the ears, we get it. The Olympics are "SOCHI 2014!" Nope, they're actually in Adler which, like East Rutherford, is a bit of a swamp with a shiny jewel of a sports complex right in the middle. And a little smelly.

We all had adjusted to the 12-hour time zone change and jetlag was conquered, but staying awake for a 3:30 a.m. kick-off totally screwed up our systems and took another couple days from which to recover (but totally worth it!). Also, I mentioned previously we had stopped in Moscow on the way here, and walking around Red Square we perused all the little kiosks hocking crap to tourists. One of many stands had Matryoshka dolls, and lo and behold, they had a Seahawks one! I took it as a sign, and the boys were mine after bartering down the price since it wasn't the current uniform or roster. Although they were damn close, the largest doll being Marshawn Lynch, but hey there, Ben Obomanu! And now they're filled with Russian Skittles.

I'm sure some of you, like me, have to explain the finer points of football to friends once in a while. With Americans, at least they have some frame of reference, thanks to movies and TV and the fact NFL is king. But have you tried to explain the rules to a foreigner? Who speaks broken English? Good god. The rulebook is longer than the New Testament, and no less confusing. A typical exchange:

Me: "So if a team breaks a rule, the officials throw a penalty flag, and they move the ball forward or back depending on if it's against the offense or defense. And sometime it's the same down again, sometimes it changes. "

Me: "No, they do, but it's mainly to stop the clock or prevent the play from starting."

Them: [after a Pete Carroll challenge] "There's a red flag and a yellow flag?"

Me: "It takes a while to really get it."

Our hotel bar staff pretty much gave up comprehension and just enjoyed the show, part of which was watching me watch the game, which I've been told is fairly entertaining in and of itself. They did understand the significance of my victory and were thrilled to celebrate with me post-game. VODKA FOR EVERYBODY!

And now for a random tangent ...

So this whole Gays + Russia thing is, as we say back in LA, no muy bueno. But you'd be hard pressed to tell around Soch ... I mean, Adler, because there are rainbows. EVERYWHERE. The Adler Arena, home to long-track speedskating, is covered in lights at night, and the colors don't just change. They are in ROYGBIV order. Same goes for the Main Press and International Broadcasting Centers. At night, the building lights up like we go over it to Oz. Right next door to that is housing for press, and during the day it's one giant, inverted rainbow thanks to the colorful railings on every floor. But the coup de grâce or as I like to phonetically butcher it, "coop da grace," because ‘Merica, was listening to the Olympic Park BLARING "Born this Way" by Lady Gaga. They've played pop music pretty much 24/7 since the Opening Ceremony, so it's not like this came out of nowhere, but still. There I am standing on the roof of our hotel, watching rainbow light shows all around me, listening to THAT song ... and I'm in Russia?! It was surreal.

I'm sure the colorful displays are only meant to be welcoming and inviting, but I'm a gay guy, and when I see a buttload of rainbows, what conclusion am I supposed to jump to? Hawai'i?

Ok, maybe I'll think of that instead. 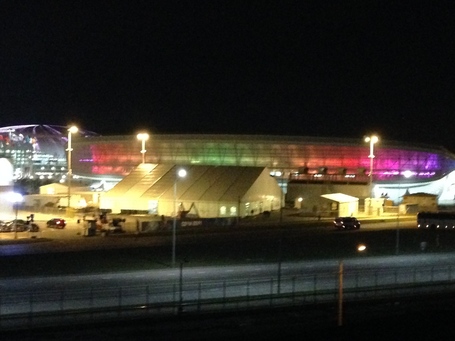 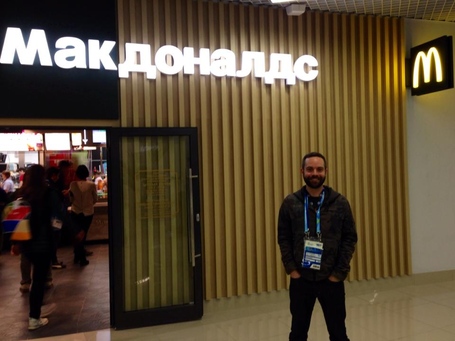 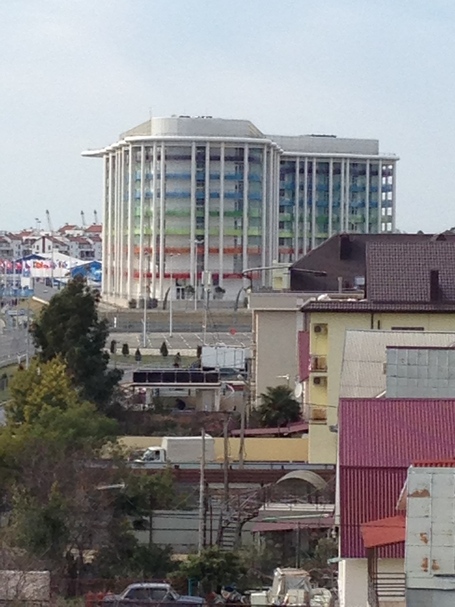