"It's one of the best things he's ever done because it's made us closer friends," said a teammate on the Drew University baseball team. "It doesn't change a thing."

Share All sharing options for: College baseball player Matt Kaplon came out as gay to his team Sunday after years of struggle

Matt Kaplon didn't want to call a big team meeting to tell his Drew University baseball team that he's gay. He was averse to the spectacle of a big production, simply wanting his teammates to finally know who he was as he approached the final season of his college career. All he knew was that he wanted them to hear it from him first.

He started the process last week by sharing the news with his head coach, Brian Hirschberg. At 31, Hirschberg isn't much older than Kaplon. The revelation didn't faze him.

"He's as close to a family member as anyone I've ever coached," Hirschberg told Outsports. "He's like a younger brother to me. When Matt shared his story with me, I respected him more, if that's even possible."

Matt decided he had to tell the team this weekend. With the season approaching, he didn't want to play a single inning without them knowing who exactly he is. The team had a planned community service event this past Sunday afternoon; Coach would call the team together early so Kaplon could talk to them all together.

When they gathered in an overheated classroom Sunday afternoon before venturing out for their community service, coach told them Kaplon wanted to address the team.

Kaplon told them he had simply not been himself since coming to college - with just a couple months left of his time with them, he felt he had to be fully honest before it was too late: He didn't want to leave without them knowing exactly who he was. 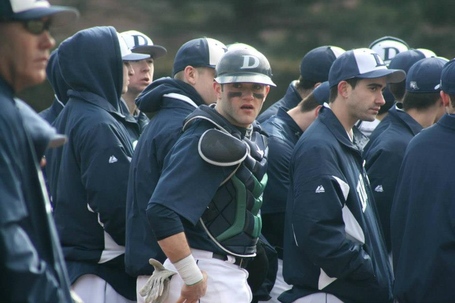 It wasn't an easy 21-year mental journey that lead Kaplon to the front of that classroom addressing his team. His life had been largely defined by his involvement in sports, and baseball in particular.

Kaplon is a star on his Drew University team, starting at catcher 97 games his first three seasons. Last season he was third on the team with a .327 batting average, throwing out 13 runners in 29 starts. At Palisades Park High School in Bergen County, N.J., he was his team's most valuable player his senior year.

Playing high school baseball just a few miles from New York City, the culture that swirled around sports his entire life seemed to send a clear message about his concealed sexual orientation.

"Growing up in sports, you kind of hear this stigma that being gay isn't OK," Kaplon said. "That traveled with me into college."

Part of that distinct message about being gay in sports was the language around baseball. "Faggot" and "sissy" and other homophobic slurs have been present in the sports world for decades: High school baseball in New Jersey is no different.

"There were the comments I'd hear on the field. It wasn't directed at anyone and no one meant anything by it, but it meant something to me. It further solidified in my head that it wasn't OK and that people were against it and they were against having a gay friend or a teammate."

Those comments have continued at Drew. Even Hirschberg admits he's heard homophobic language on his team, including the word "faggot."

"Having played myself and seeing the climate we're in now as a sports culture, it's not easy to be a gay athlete," Hirschberg said. "It takes a lot of courage I think to come out. I'm still learning a lot of this myself."

It wasn't just on the field or in the locker room that Kaplon felt the pressure to be straight. His entire world revolved around sports and all of his free time was spent with athletes. He'd go from hanging out in a friend's basement and hearing negative comments, to the baseball field and hearing it more, to high school gym class and hearing it still more.

He did have one annual reprieve: A month-long family trip to North Truro, Mass., just outside the gay mecca of Provincetown, every August. Even before he understood his sexual orientation, he knew those family vacations were something special.

"Being able to go to P'town every August and spend the month there and see gay people right in front of me while I was still grappling with it, it was good for me. It proved to me that I wasn't the only person who was gay. But I still felt like I was the only athlete."

That began to change last October when he came across the story of Hillsdale College basketball player Derek Schell. He reached out to Schell and the two became fast friends. While the two have never met, the impact of their conversations - and Kaplon's revelation that he wasn't the only gay athlete - was profound.

Derek Schell, the first openly gay NCAA Division II basketball player sees his excitement renewed after coming out to his teammates and coaches. "Sometimes the darkest times in life are only doorways to the best moments of your life."

"Words cannot describe what Derek has meant to me," Kaplon said. "He saved my life."

Kaplon finally found the strength to come out to friends and family after Thanksgiving break last November. A young woman in his circle of friends had pursued him for years to no avail. Some of his friends began wondering if he liked women at all. Driving home one night with his high school friend Lewis, the question finally came up: "Are you gay?"

"I lied to my best friend about myself," he said. "It made me think a lot about who I was and who I was going to be."

A couple weeks later, around Christmas break, Kaplon told Lewis that he's gay. His friend's positive reaction gave him further confidence to come out to everyone he knew. When he read Outsports' story of Willamette College football player Conner Mertens last month, Kaplon knew it was time to share this side of himself with his teammates. He didn't want to live a lie in his final season with the team - Schell and Mertens showed him that he didn't have to.

"Everyone tells me that college is supposed to be the best four years of my life," Kaplon said." I've had a great time, but for three and a half of them, I've been hiding things and not being the real me. Building friendships and meeting people and with my teammates, they know part of me but I finally feel like I want them to know everything. I want to be me 100% and make sure they know I'm not hiding anything. I'm ready for that. I'm ready to start not having to hide." 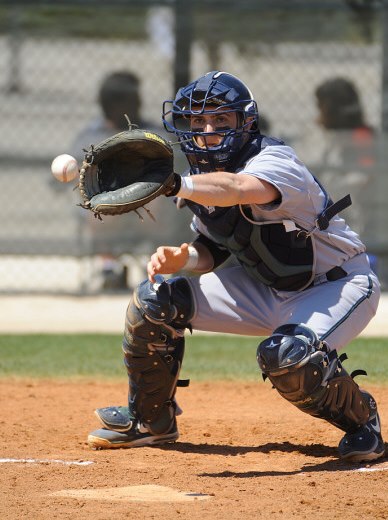 The first teammate he told was sophomore second baseman Anthony Feltre. The two had been close for the last year, and Kaplon felt the rising star on the team was the perfect person to be the first to know.

"He's the same exact Matt as he's ever been," Feltre said after learning his good friend is gay. "It's one of the best things he's ever done because it's made us closer friends. It doesn't change a thing. If anything, since he told me this really personal thing we've started hanging out more and talking about more serious things."

Feltre's reaction further boosted Kaplon's confidence. His teammate didn't push him away - quite the opposite, he embraced him and the two have spent more time together in the last couple of weeks than they have before.

When he stood in front of the team Sunday afternoon - completely honest with them for the first time - he was confident their reaction would be positive, but he was still concerned.

There was silence for a few moments. Quicky, one teammate rose and shook Kaplon's hand.

"That was the manliest thing I've ever seen," he told Kaplon in front of the group.

The rest of the team applauded.

Six months earlier, he had gone back into the closet to simply exist on his team. Now he was standing before the team and getting high-fives for sharing this secret side of himself with them.

"It's amazing to see how much more real your friendships become when you open up to them and let them know who you are," Kaplon said. "They've known me for three years but I feel like they really know me now."

Hirschberg wasn't surprised by the overwhelmingly positive reaction from the team. As Kaplon shared building anxiety about telling his teammates in the days leading up to it, Hirschberg reassured him that the team would have his back.

"I told him, you've earned their respect as an athlete and a person and a competitor," Hirschberg said. "I don't think they're going to treat him differently because he's gay. Through his teamwork and sportsmanship, he's earned that and I think his teammates are going to be cool with it."

As for the homophobic language that once dipped in and out of the Rangers' locker room, Hirschberg knows Kaplon's coming out signals the end of it.

"When you have something that hits close to home, you have a heightened awareness," he said. "When you don't know there is a gay person around, you use faggot and gay because you're not putting a face to that word. Everybody on our team is now going to have a heightened awareness in a very positive way. The 37 other teammates and three other coaches we have will now have to become a little bit better and caring in their choice of words.

"They'll have to become better people because now they know they may hurt somebody they care about."

In the coming weeks and months, Kaplon wants to help other athletes find the strength to be themselves. It's ultimately that reason - to pay back the good will shown him by Schell and other gay athletes like Mertens - that he is sharing his story publicly.

That -- and win some baseball games.

Matt Kaplon can be found on Twitter @mattkaplon or via email at mattkaplon@gmail.com. If you're an LGBT athlete looking for someone to talk with, he'd love to hear from you.