Jason Collins wears #98 for Nets for first time, a tribute to Matthew Shepard

Collins had four of the top five selling jersey items in the NBA since he became the first openly gay player in league history.

Share All sharing options for: Jason Collins wears #98 for Nets for first time, a tribute to Matthew Shepard

It is amazing to think that an openly gay man is playing in the NBA and he is wearing No. 98 to honor the memory of Matthew Shepard, killed in 1998. Jason Collins played his second game for the Brooklyn Nets on Wednesday, but his first with 98, the same number he wore in his last two stops with Boston and Washington. But he was not out yet.

How big is Collins' jersey been for sales? This big:

Collins had four of the top five selling jersey items Wednesday on NBAStore.com, the day the NBA's first openly gay player was to wear the jersey in a game for the first time at Portland. His home and road replica jerseys, the women's replica road jersey and the men's T-shirt with number on it were top in their categories. A LeBron James item led the fifth category. A league spokesperson says Collins' items were No. 1 in those four categories.

Here is Jason in a full-frame shot wearing No. 98: 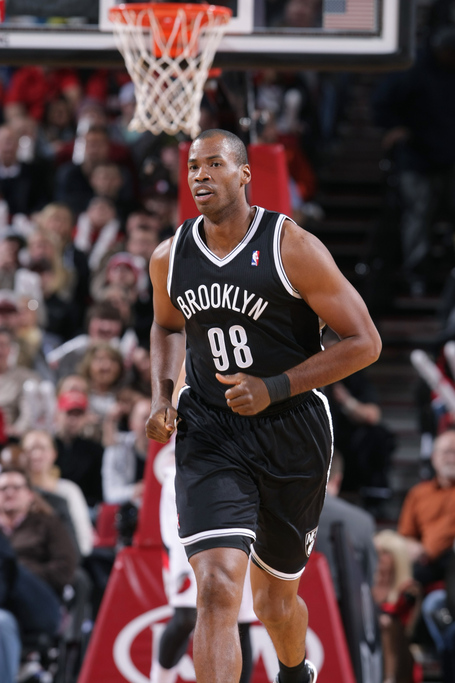 Jason Collins comes out as gay