Add Minnesota Vikings Chad Greenway, Jerome Felton and Blair Walsh to the list of NFL players who say that Michael Sam would be accepted in a locker room.

"Without a doubt," Greenway, a linebacker, told the Minneapolis Star Tribune. "There are so many differences between all of us. It seems to me like an openly gay player would be a nonissue."

"He won’t have an overly difficult time," Felton, a fullback, told the paper. "But there will be an adjustment period. When he was at Missouri, he told everybody his senior year. They had already grown to become good friends with him and love him and consider him a teammate and a brother. In the NFL, people won’t know who he is. But, honestly, the toughest thing for him is going to be dealing with the media. He’ll have to answer those stupid questions over and over.

On a Twitter Q&A, Walsh, the Vikings kicker, answered a question from Luis Guitart, an Outsports reader: 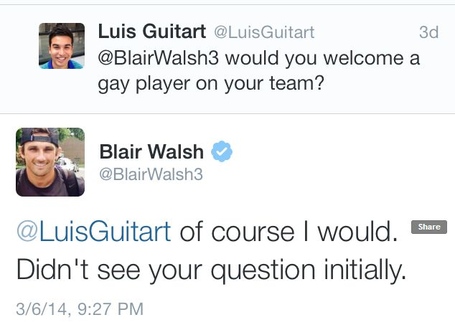 "Great to see a player take no hesitance in answering and giving a straightforward answer," Guitart said. Walsh was the kicker in 2012 when Chris Kluwe was the punter and huge advocate of gay rights. After leaving the team, Kluwe accused Vikings special teams coach Mike Priefer of making anti-gay remarks, which he has denied. An investigation is ongoing.

None of these three players' answers are of themselves especially noteworthy, except to show the growing acceptance in locker rooms of having an openly gay teammate. We will continue to highlight these when they come up.