Gay former college offensive lineman Garrett Snoeyenbos had stints at Vanderbilt and Navy before leaving the sport where he felt he didn't belong.

Share All sharing options for: Gay former college football player talks about being closeted at Navy and Vanderbilt

Garrett Snoeyenbos was lost. In the spring of 2012, he had just graduated from the University of Tennessee, his third college in five years. After stints on the football teams of Vanderbilt and the Naval Academy, he had hung up his cleats and headed back to the Volunteer State where he was a standout high school football player. Yet no matter where he looked, he couldn't find a place he felt he belonged.

Snoeyenbos (said SNOW-en-bus) had struggled through all of high school and college reconciling his powerful stature as an offensive lineman - the giants of the gridiron - with his persistent attraction to men. With football behind him and looking ahead to medical school, he knew he couldn't live the rest of his life with a secret buried inside him.

Shortly after graduating from Tennessee in the spring of 2012, he lay on his bed staring at the ceiling in his own come-to-Jesus moment. After years of hiding his sexual orientation to even himself, he knew his constant self-denial was untenable.

"I just said, 'Garrett, you're lying to yourself. You need to start accepting who you are. Stop pretending you're something you're not. Learn to be you and learn to love yourself.'"

It wasn't an easy task for someone who had made hiding his sexual orientation part of his self-identity for so long.

Snoeyenbos had a pretty good idea he was gay since he was at Ravenwood High School in Brentwood, Tenn., 20 minutes south of Nashville, where he won a state championship. The standout offensive lineman felt a distinct attraction to other boys and had little interest in girls, but he simply couldn't accept that he was "gay." He convinced himself that an attraction to the same sex didn't make him gay, that it was just a passing phase, or that his increasingly common thoughts didn't define him.

In his mind, he could be gay or be a football player: He couldn't be both.

Scott Cooper just finished his senior season. He found true acceptance on his Augsburg College football team, which included him being asked by a coach to speak on National Coming Out Day and introducing his partner at Senior Day.

It was a defining dynamic for Snoeyenbos. While he grew up in a religious home, first in Minnesota then in Tennessee after a family move, his perception of gay people came largely from sports. Preachings from the pulpit about the sins of homosexuality went largely unabsorbed - Language from his coaches and teammates, on the other hand, hit him in the gut.

"A lot of it was due to the vernacular on the practice field," Snoeyenbos said. "If you got beat, the coach or another player would yell, 'quit being a fag, quit being a pussy.' That contributed to me being in denial because that just couldn't be. If I wanted to be good at football, there's no way I could be gay."

With his secret buried deep inside, Snoeyenbos was a walk-on freshman at Vanderbilt in 2007. He'd been recruited by other schools - he said Tennessee and Ole Miss had expressed interest - but the academic reputation of Vanderbilt drew him to the Commodores (the school was U.S. News & World Reports' #17-ranked national university last year).

At Vanderbilt he suited up for several games but didn't play, coaches keeping his redshirt status in-tact his first year. He was a little undersized for an offensive lineman in the SEC, listed on the team's Web site at 6-foot-4, 285 lbs. They wanted to bulk him up with weights and experience before taking the field.

His year at Vanderbilt was trying. The football was right, but he felt out of place, like he didn't belong. It wasn't necessarily outright homophobia that got to him, but rather persistent, overt heterosexuality that dominated locker room banter.

"A lot of the conversations in the locker room were about such-and-such girl and how she looked and what went on over the weekend. It's this over-emphasized heterosexuality, the stereotypical macho-man talk, who has his pick of any girl, things like that."

He did try to play the part, fabricating stories of exploits with women. He made sure teammates saw him leave parties with co-eds, only to make an excuse halfway home for why he had to go to his room by himself. It just wouldn't stick.

"It's hard to put into words. I felt removed from my teammates, that I couldn't relate to them. There was no animosity. They were at worst cordial, but pretty much everyone on the team was nice to me." 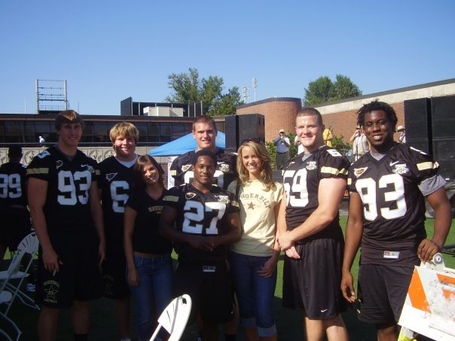 Snoeyenbos (back row, center of photo) with some of his Vanderbilt teammates and supporters.

After a year at Vanderbilt he transferred to the Naval Academy. This was 2008, when George W. Bush was still President. Same-sex marriage rights were increasing but were under heavy political attack. Since he knew he would never act on his gay thoughts, Don't Ask Don't Tell - still the law of the land at the time - didn't apply.

"At the time, as far as my mind was concerned, I wasn't gay. I knew I was only attracted to men but I convinced myself that that didn't make me gay."

Even if he did want to share his sexual attraction with teammates and coaches, the Navy's Don't Ask Don't Tell policy at the time would have put him in jeopardy of expulsion if he came out. That policy has been repealed. Naval Academy spokesperson John Schofield said any mistreatment of gay athletes in or outside the locker room is not tolerated.

"Language or behavior inconsistent with the values and standards enforced at the Naval Academy is not tolerated," Schofield said. "The Naval Academy is a family, not just in the locker rooms that support all 33 varsity sports, but in Bancroft Hall, as well, where all 4400+ midshipmen live on campus. Hate speech or any type of behavior that runs counter to the ideals of duty, honor and loyalty will be met with strict adjudication in the midshipman conduct system."

Snoeyenbos' two years at Navy weren't fortuitous. NCAA rules forced him to sit for the 2008 season due to his transfer. Playing on the practice squad that autumn, he tore the plantar fascia in one foot. That spring, as he was set to compete for a spot on the offensive line, he had pneumonia and missed almost two weeks of practice. Early in the 2009 season he tore the plantar fascia in his other foot.

Still searching for a place to fit in, he transferred again, this time to the University of Tennessee. By then he was nearing his senior season. Trying to convince the coaching staff to give a roster spot to a twice-injured senior would be a daunting task. He chose to focus on his studies instead.

Three years into his five years of NCAA eligibility, struggling with his sexual orientation and now injuries, it was the end of the line for his football career.

Snoeyenbos said with "100% certainty" that if he were in college football today and had witnessed the coming out of the likes of Michael Sam and Jason Collins, he would have felt more comfortable with being gay. In fact, he may have never left football.

"There was no one that I knew of who defied that perception, no successful male athlete who was also gay. I was never depressed, but I still always felt like I wasn't ever all there, that there was part of me that was missing. To be able to say I have a potential role model here, that would have definitely helped me."

While other football players - like David Kopay, Roy Simmons and Esera Tuaolo - had come out previously, he hadn't been able to watch them compete as openly gay men. That made all the difference.

"It's tough to become a fan of someone who is already retired," he said.

He said outwardly accepting coaching staff and teammates would have also gone a long way too. While it was one thing to see the overt heterosexuality, proactive statements of acceptance and conversations about gay people could have built a comfort level for Snoeyenbos on the team that may have opened the door to a five-year career at Vanderbilt.

Ultimately, that's what drove Snoeyenbos to contact Outsports. Though he never came out to a teammate or a coach, and while he never quite felt like he fit in on a football team, he wants gay athletes to know what he wish someone explained to him seven years ago: You can be gay and successful in sports.

"I miss football almost every day, even though I never really felt like I fit in. I love the sport and I do spend my Saturdays in the fall in front of the TV watching games all day."

Snoeyenbos doesn't want a single other athlete to ever leave the sport he loves because he felt like he didn't belong.