The famous gay artist Tom of Finland drew a lot of homoerotic locker room scenes, but it's a stretch to say he delved at all into sports. Nonetheless, it's cool that the Finland postal service will issue three stamps commemorating his work later this year. They might be the first stamps that show a muscular naked male butt. Look for these to become collector's items.

From the Finnish postal service:

The autumn's stamp series begins September 8 with Tom of Finland, who is considered one of the most well-known Finnish artists around the world. His emphatically masculine homoerotic drawings have attained iconic status in their genre and had an influence on, for instance, pop culture and fashion. In his works, Tom of Finland utilized the self-irony and humor typical of subcultures.

During his career, Tom of Finland produced more than 3,500 drawings. The two drawings on the stamp sheet were selected by graphic artist Timo Berry, who designed the stamp, and Susanna Luoto, the Finnish representative of the foundation named after Tom of Finland operating in Los Angeles.

The drawings on the stamp sheet represent strong and confident male figures typical of their designer. "The sheet portrays a sensual life force and being proud of oneself. There is never too much of that in this northern country," says Timo Berry.

Alas, the stamps are self-adhesive. Making them lickable would have been perfect.

Here are the three stamps (click image for larger view): 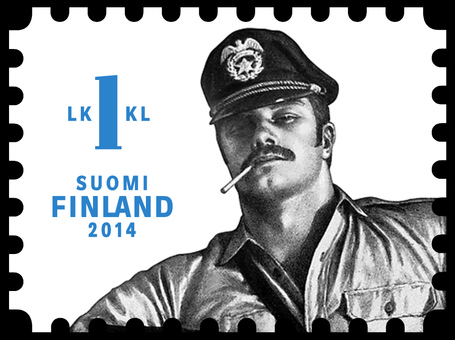 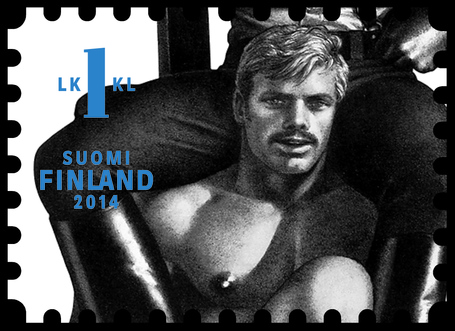 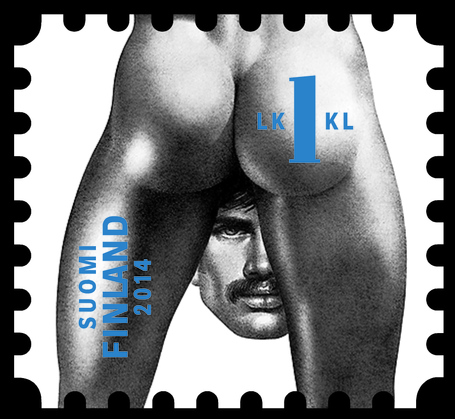