T-shirts with the words "Maradona Maricon ('faggot')" and "C Ronaldo is gay," being sold in Brazil for the World Cup, have sold out at $85 each, the retailer reports.

All 120 of the shirts with the anti-gay slogans were sold by the Sergio K clothing retailer after publicity about their existence, Brazilian media report. Sergio Kamalakian, Sergio K's owner, denied the shirts were homophobic, instead calling them "irreverent."

"It's not homophobic to me, homophobia is another story," he said. "The T-shirts don't say attack them, and they do not incite violence."

The shirts were designed, a spokesperson said, for Brazilian fans who wanted to root against other countries. There were other shirts in the same line that did not go the homophobic route against other players.

The websites AAVAZ and All Out started petitions denouncing the shirts and the retailer. Said the AAVAZ petition:

These shirts use homosexuality as if it were an insult, an attack, a way to reduce people to ridicule them. In the designer Sergio K Facebook page, a blog post makes clear the purpose of the shirts: "what about poking the Argentines with a provocative phrase emblazoned on a shirt distrusting of masculinity Maradona?" No, being gay does not make one "less of a man" and a "complaint" that someone is gay should not be used as a "provocation."

No, we will never tolerate something that is treated as normal! Just as a racist shirt cursing players from other countries, or any person of "monkey" would be absolutely unacceptable, it is also totally unacceptable to be sold and exhibited in a T-shirt using homophobic malls to offend anyone terms!

Unfortunately, the shirts made Sergio K money and got the brand publicity, which was obviously the intent from the start. 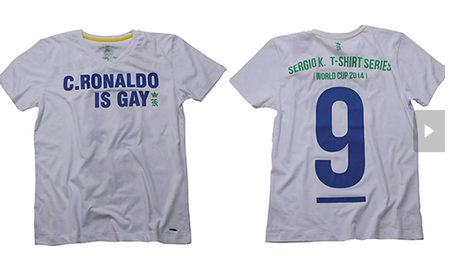 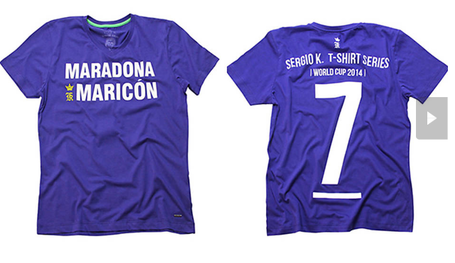