Fallon Fox sits down with HBO's Real Sports with Bryan Gumbel and gives insights into her personal and professional life she hasn't shared before.

HBO's Real Sports with Bryant Gumbel will air a segment on Fallon Fox during their episode on Tuesday. The trans MMA fighter has experienced an avalanche of both support and detraction since coming out as trans in March 2013. Mary Carrillo sits down with Fox to explore her personal and professional life at levels Fox hasn't revealed publicly before.

Most recently, Fox won her first professional match in her home town of Chicago. Supporters - both trans and cisgender - came out in droves to support her.

"To be in the city where I started, the city that welcomed me with open arms since the moment I first moved here, was an amazing experience," Fox told Outsports. "People came from all over the area to view some amazing fights and to see me. And they cheered me on. I love my town."

She talks with Outsports about gay-conversion therapy, her passion for Mixed Martial Arts and her post-coming-out fears.

Fallon Fox's loss brings out the worst in MMA

Despite arguments of "fairness" and "safety" being completely derailed, many in the MMA world show their true colors by sticking to their baseless arguments.

She had lost the championship match of her last tournament and faced a torrent of continued criticism. The crowd in the arena that night had been rather merciless in painting her as the villain. The victory in Chicago meant the world to her.

"I feel like the real Fallon Fox is back and on track. Lately, I've been remembering why I started training and competing in my sport again. I believe that helps."

Fox said the episode of Real Sports could provide some real insights into her life: "From what I remember saying in the interviews, the episode should be interesting and enlightening to viewers."

The episode of Real Sports premieres April 22 and will run for the following few weeks. From the HBO Real Sports site:

Since turning pro in mixed martial arts in 2012 and being outed by a reporter in 2013, Fallon Fox, 38, is now the most prominent transgender athlete in professional sports and a trailblazer for the transgender community. The reaction from the MMA community has largely been hostile, with many fans and fighters opposing her participation in the women's divisions because they believe her male attributes provide an unfair advantage. Despite the scrutiny, Fox continues to fight. In this REAL SPORTS/Sports Illustrated segment, correspondent Mary Carillo goes one-on-one with Fox to learn about her struggles for acceptance and legitimacy in a sport where many still view her as a man.

Fallon Fox has created a new social media campaign - #FistBumpNoSlurs - to bring awareness to the power of trans slurs, even when they are passed off as jokes. 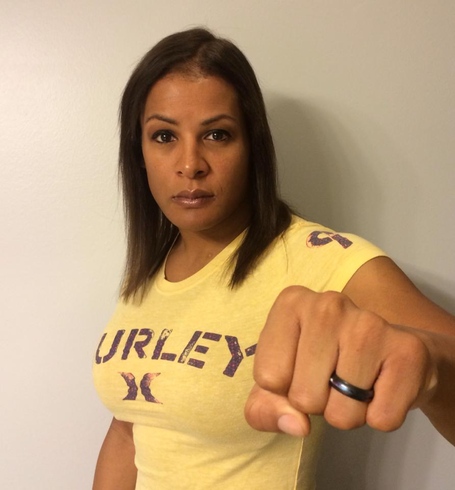