Chip McKenney had a long career as an equestrian athlete and now finds fulfillment with Gay Polo League.

Share All sharing options for: Horseman finds his niche with Gay Polo League

I knew I was gay at an early age. Not that I knew what "gay" meant. I only knew I was different than other boys. I liked boys not girls. I loved sports, but not team sports. For untold and unexplainable reasons, I did not feel team sports were safe for me.

Not physically safe, but emotionally safe. As a young gay kid, I kept my secret safe by maintaining a certain distance, physically and emotionally from others. The "fear of the playground" (getting beaten up for being different) morphs into a "fear of the locker room" (getting found out!). So I avoided team sports in favor of "safer" individual sports.

I excelled at solo sports -- I was an avid skier from an early age; I was slalom waterskiing at 8, and began riding horses competitively at 13.  By 15, I was Maine state champion in my equation division. With each year, my passion for horses grew. I was driven to excel in riding; I felt it kept me safe. Following high school graduation, I worked at a sales barn in Connecticut. I rode and competed in hunter and jumper divisions all over New England. Between rides, I would muck stalls, groom horses, clean tack, give riding lessons and even hayed fields. I would do anything to be around horses.

As I began competing in horse shows, I became aware of how many gay riders existed, and how welcoming the horse show world appeared to be to gay men. Not that I came out immediately. On the contrary, I thought it would limit my riding career. My fear diminished as I started to identify more "gay" than before. I felt less threatened by my sexuality, and continued to excel in horse competitions. I show jumped on the East and West Coasts, traveled to Europe many times to ride, saw Mexico from the back of a horse and hit Canada a few times too.

Finally, I was entirely out. Out as a man. Out as an equestrian. Out as an athlete. The horse show world is a welcoming world to LGBT riders, grooms, owners etc – one I loved for 37 years. 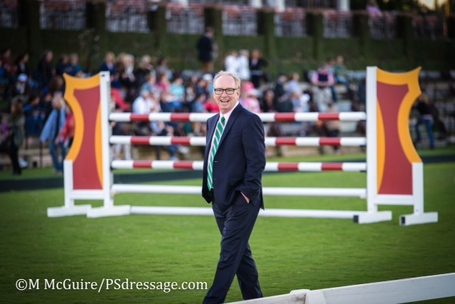 I was only halfway through my first polo lesson in Santa Barbara when I turned to the instructor and said with the same enthusiasm that launched many a movement, "I’m going to create a Gay Polo League."  Even then, I was uncertain how the established polo world would accept a gay identified group of polo players.  It was a pleasant surprise.  Polo Clubs everywhere welcomed us graciously and enthusiastically.  It seemed to matter more that we loved polo than whom we loved.

I turned the Gay Polo League into a success through my passion and the support and enthusiasm of an amazing community. Not only is the league the only one of its kind in the world, it’s also one of the only gay leagues where the players participate in sporting events both within and outside of the LGBTQ community. We’ve hosted the second most well-attended events in all of polo history with more than 5,000 people in attendance. The U.S. Polo Association, the national governing body of polo, has been incredibly welcoming to the Gay Polo League and its members, giving us USPA status to show their support.

In comparison to individual sports, I’ve been both surprised and impressed by the new community I’ve become a part of. The Gay Polo League aimed to emulate that same friendly and open tone. I particularly enjoyed how people were always eager to ask a fellow polo player to join their team.

Polo’s unique makeup makes for a great equalizer, with horses allowing men and women of all ages to participate. This, plus an older and usually more-educated and better-traveled clientele than most other national sports, creates a more diverse and open environment. It’s all the colors of the rainbow out there on the field.

I believe that the Gay Polo League marks a big difference in the changing gay community. People are moving out of the mindset of focusing on activities, communities, and events based around the LGBTQ identities and looking for different experiences that prioritize common interests within the community, including sports.

Chip McKenney can be reached via the Gay Polo League.